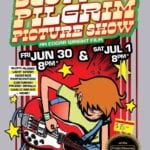 Not only will this be a screening of the classic film adaptation of Scott Pilgrim vs. The World, but there will be a light show, quote-along captions, a costume contest, and a very apropos helping of garlic bread. If you’ve ever been to one of those fan obsessed screening of Rocky Horror Picture Show or The Big Lebowski, you know what you might be in for.

You can (and really should) get tickets here.

Given Edgar Wright’s canon of Shaun of the Dead, Scott Pilgrim vs. The World, The World’s End, etc., we’re confident that his first swing at animation could very well be a home run.

Dreamworks Animation has been working on a film that centered around the nature of shadows and have recently brought on Wright to direct and co-write along with UK comedian and Little Britain’s David Walliams to bring a whole new angle to the project.

So far, the only other thing we know about this film is that it’ll be called “Me & My Shadow”.

No other details have been given as of yet, but from this being a Dreamworks project with Wright on board, we’d venture a guess as something adjacent to Inside Out, focusing on shadows obviously, but with the Edgar Wright panache. We’ll probably have to wait awhile to see if we’re right for this being both being animated and under wraps.

Edgar Wright Moving on to ‘Baby Driver’ For His Next Project

After abruptly leaving Ant-Man, director Edgar Wright is on to his next project that will “be in the vein of his Cornetto Trilogy that he made with Simon Pegg and Nick Frost”.

So far, he’ll be co-writing the script and is in talks to helm the feature as director.

We’re just glad to hear that Wright is back.

Citing creative differences, Edgar Wright has left his post as director of the upcoming Ant-Man movie from Marvel Studios. Of course, a search for his replacement has been immediately underway with the aforementioned names of Adam McKay, Ruben Fleischer, and Rawson Thurber being floated around.

Many of you probably know McKay’s filmography/Funny or Die over Fleischer’s or Thurber’s, but know that Fleischer and Thurber helmed Zombieland and Dodgeball, respectively. Wright leaving the project is sad, but we’ll be intrigued what any one of the three will do.

Beyond just reading the screenplays for Shaun of the Dead, Hot Fuzz, and The World’s End, you can now see accompanying storyboards, stills, b-roll, and more thanks to director Edgar Wright.

So, enjoy the rest of your afternoon/evening/early early morning.

Edgar Wright & Simon Pegg’s latest movie and third part of their so-called Cornetto Trilogy (in each of the movie, they eat an ice cream treat known as a Cornetto/also, Simon Pegg seems to gets more bad ass in each one), The World’s End, is out today. For how great, the other two in the trilogy, Shaun of the Dead and Hot Fuzz, were, The World’s End definitely should be on your list of what to watch this weekend.

Here are showtimes around Los Angeles.

In what might be an unprecedented event to promote a movie on its opening weekend, Regal Cinemas is screening what has been loosely coined as The Cornetto Trilogy (Hot Fuzz, Shaun of the Dead, and The World’s End), a trio of films directed by Edgar Wright, written by Simon Pegg and Edgar Wright, and starring Nick Frost and Simon Pegg on Thurs. Aug. 22nd throughout their various franchises across the U.S.

New Trailer For The World’s End

It’s everything you’ve come to love about Shaun of the Dead and Hot Fuzz except it’s set in an apocalypse movie.

Watch full trailer for The World’s End directed by Edgar Wright and written by Simon Pegg and Edgar Wright.

1) Jarrod Harris does stand-up and Girl From Impanema in Vietnamese on Lopez Tonight.

2) Louis C.K. on Letterman promoting the proliferation of the lion population and taking a long deserved shot at the Kansas City Royals.

3) We don’t get screeners here cause well (cough cough)… Anyways, sci-fi action comedy Attack the Block is started its limited theater run at Arclight Hollywood today and by the looks of the trailer and everyone we know and respect saying nothing but great things about it, you should probably, at the very least check it out.

4) Yesterday, Marc Maron gave a heartfelt, inspiring speech about being a comedian that we have posted at least twice already.  Read a transcript of the entire speech at the Comic’s Comic.

Then my new manager got back to me and said, “They liked the jokes you did when you introduced Kindler a couple of years ago. That’s why they asked you.”

There’s a reason we’re posting it for at least a third time and maybe more. Cringe Humor even caught a small excerpt on video of the keynote address at Just For Laughs, which in our opinion, should be reprinted several times over like the Gettysburg Address in souvenir stores across America.

6) There will be an Arizona Comedy Festival and they’re currently taking submissions. [via Laughspin.com]

7) Our first piece for the Nerdist: "Why You Probably Haven’t Heard Any Funny Amy Winehouse Jokes”. Already, there’s an amazing comment from eric:

“The formula [comedy = tragedy + time] can be revised thus: (tragedy + time) / context = comedy. Time is inversely related to context–or–the more context you add, the less time between the present and the tragic event is needed in order to be funny. Less context, more time, conversely.”

Think about it. It’s kinda true.