We’ll start off by saying this: we found the Drew Michael HBO stand-up special to be very funny.

There was already so much discussion of what this stand-up special without a live audience would or could be even before it premiered over this weekend that we wanted to make sure at least stating whether it was funny or not was clear before we dive deep into the details.

This special is similar to Hannah Gadsby’s Nanette in that it shows how comedy is an art form, which still is a foreign concept to a lot of people. Comedy is indeed an art form and, as an art form, evolution is inevitable and often startling. Michael and Carmichael wanted to offer up a different way for stand-up comedy to be seen and they accomplished that in kind of an exquisite way on the back of Drew’s brilliant writing (this special has one of the all time, best jokes about suicide) and confessional performance.

Easily, this is the most cinematic comedy special there has ever been. The look suggests that we’re in Drew’s psyche and going deeper as the special progresses. You might notice that colors get deeper, moodier, and ambient sounds and sound effects denote how “far” we’re going into Drew’s thoughts. Also, there’s a clear narrative arc, a rarity in stand-up, established by interstitial conversations with a girlfriend that sort of act as chapters in the special.

That being said, it should be noted that this special is probably best enjoyed with headphones and streaming off a laptop in order to catch all this detail.

The sign of a joke working is a subsequent laugh after the joke is told. Unlike 99% of recorded stand-up, there is no laughter that you hear after Drew’s jokes are delivered. Still, we laughed heartily at them, sometimes even applauding by ourselves while watching. In fact, for those of you that deeply loathe how laugh tracks accompany multi cam sitcoms, you might really love this special for the absence of recorded laughs that you weren’t there for. Because of Drew’s material being so dark and personal, the beats and silences actually punctuate a lot of the punchlines for us.

We’re not exactly sure what this means for the future of stand-up comedy. The odds probably are in favor of the majority of comedians still recording an hour or half hour (or in Netflix’s case, 15 mins.) in front of a live crowd. That being said, we hope this Drew Michael special, which highly worth watching and enjoying, encourages comedy, as a whole, to try something different.

Well, this is sure to upset a lot of comedy purists.

That being said, if you watch this behind-the-scenes clip, it seems like both Jerrod Carmichael and Drew Michael are completely fine with that.

They’re not even entirely sure if this can be categorized as a stand-up special. Of course, that’s really up to who is watching and how they interpret and react to the special as Hannah Gadsby’s Nanette has shown. It should be noted that there is plenty of room for an experiment like this underneath the ever burgeoning and evolving world of stand-up comedy.

They both are accomplished comedians we really dig and just want to try something different, which we’re on board for. Also, if you think this is totally unprecedented, we’d like to remind you that a special sans a live audience has been tried before by Harland Williams doing “Force of Nature” in the desert.

From these few bits of the special in the promos, the special does seem very moody (maybe like certain Drake songs?) and we already feel a certain heightened tension when the laughter of others is absence. That could end up being something that pays off.

We’ve really enjoyed Drew’s albums in the past that were recorded in front of live crowds. Drew’s comedy is undeniably dark and personal and that probably will feel, again, heightened in this special due to the absence of laughter from others that you’re used to.

In any case, we can’t wait to see what Drew and Jerrod have cooked up in its entirety on August 25th when the special premieres on HBO.

For quite some time, Drew Michael has been on the darker side of comedy and we have quite enjoyed it (especially his album Funny to Death).

So, this minimalist, yet trippy trailer for his upcoming HBO special doesn’t come as a total surprise. However, it does leave us curious as to what lies in store for the hour stand-up special since stand-up-turned-comedy-impresario Jerrod Carmichael is directing, there is no audience, and there seems to be a secondary character played by a girl going through a roller coaster of emotions.

See for yourself here. Drew Michael premieres on HBO on Saturday, August 25th. 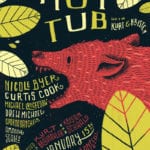 Win tickets to next week’s Hot Tub (as well as chance to catch Aparna Nancherla who is in town) here: http://thecomedybureau.dola.com/giveaways

When it comes to dark comedy, there are a lot of comedians that walk on the dark side merely as a stunt. They just say something shocking just to get a rise out of people and, more often than not, there’s no real depth or artistry to it.

Drew Michael deals in dark comedy, but does so by genuinely exploring the darkest corners of his already dark thoughts including his uncanny affinity for manifestos. On his latest album Funny to Death, he takes a wry journey through his psyche that offers pros and cons of his beliefs, flaws, and insecurities that’s hilarious if you choose to take the ride. It’s dark comedy that’s more personal and vulnerable than it is just the idea of being dark.

Michael had his half hour special premiere on Comedy Central earlier this week, but you can get a more unfiltered, uncut, uncensored, longer offering from him with Funny to Death, available here.

Some of NYC’s finest have their episodes of The Half Hour airing tonight.

More specifically, Joe Machi’s half hour special is at 12AM and Drew Michael’s follows right after at 12:30AM.

Tune in, DVR, or whatever else you got to do to watch.