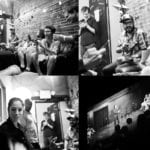 This was the moment Eric Appel looked at his phone and realized Osama Bin Laden was dead last night. Sarah Silverman was just about to go on in front of an audience who had not been exposed to the media yet because they were in a marathon comedy show. It took them a while to realize it wasn’t a bit.