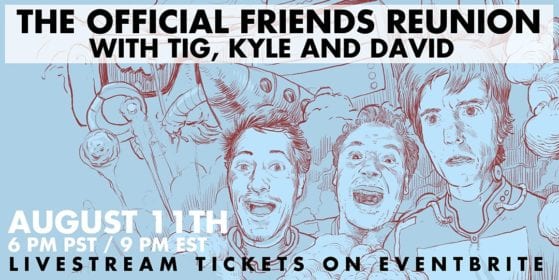 Pick of the Day: The Official Friends Reunion with Tig, Kyle and David 8/11

The very funny trio of Tig Notaro, Kyle Dunnigan, and David Huntsberger were once known and beloved as the podcast Professor Blastoff. Since then, all three have gone to their own comedy paths including Tig Notaro: Live, @kyledunnigan, and Huntsberger’s own late night show.

Without any real idea of when they can get back to a lot of what they used to do/make their bread and butter on, they’ve opted to have a “friends reunion” of a kind via a live-stream. It has been years since this has happened and it’s a rare present for Professor Blastoff fans or comedy fans in general.

The Official Friends Reunion with Tig, Kyle and David is set for Tues. Aug. 11th at 6PM PT/9PM ET. Tickets are $13.50 (portion of ticket sales will go to COVID-19 Solidarity Response Fund) and you can and should get them here. 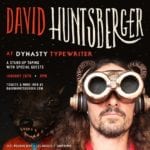 As an endlessly curious mind, David Huntsberger and his comedy really dig into and questioning the human experience, especially when it comes to the science of it all and the limits of what we know about the universe. So, you can only imagine that he’s going to do something really trippy in taping a comedy special (FYI, he’s going to do “something” really cool with “VR”).

You really ought to see what Huntsberger got cooking for the taping of his comedy special at Dynasty Typewriter this Sunday. Tickets are $15 in adv. and $20 day of.

However, we can get you in for free so long as you e-mail us at thecomedybureau@gmail.com about wanting to go to David Huntsberger’s stand-up comedy special taping.

Recently, HitchBOT, a Canadian created robot created as a social experiment hitchhiking across the globe, found its end in when destroyed by strangers in Philadelphia.

So, SyFy’s Reactor with David Huntsberger discovered that the parent of HitchBOT was, of course, a VENGE-BOT that, given its name, didn’t take too lightly to their robotic child being beaten to death.

You should also note that, unfortunately, Reactor has been cancelled and this is one of their very last sketches.

However, a robot wreaking havoc almost seems a fitting ending. Watch it here.

What a way to end a week of cancellations/endings.

One of the longer running podcasts at Earwolf, Professor Blastoff, is coming to an end after 217 episodes. This is the latest end of a comedy series in a week filled with the cancellations of HAPPYish, China, IL, and The Comedians as well as the announcement that this current season will be the final season of Key & Peele.

While it’s sad to see this podcast go, it’s great that Professor Blastoff’s crew is doing quite well in their own right. Tig Notaro has her stand-up really taking off, David Huntsberger has his own show to host on Syfy, Reactor, and Kyle Dunnigan is part of the Emmy nominated staff of Inside Amy Schumer.

If you’re looking for another podcast that wonderfully intersects science and comedy, may we suggest Probably Science.

The day has come for David Hunstberger to premiere his new show Reactor on SyFy.

He’ll be doing a comedic breakdown of everything that falls under the purview of SyFy, so long as he can avoid being chased while doing it.

Watch the premiere of Reactor at 11:30PM tonight on SyFy.

David Huntsberger Is Getting His Own Late Night Talk/Sketch Show, “Reactor” at SyFy

As of late, there are more intersections between science and comedy. The one we think you should probably know is David Huntsberger who has plenty of material about how the brain functions, relativity, etc.

SyFy’s latest attempt at a talk show will be Reactor hosted by David Huntsberger. Like a traditional late night talk show, it’ll have guests, sketches, and air at 11:30PM, but it will specifically focus on pop culture’s run-ins with science fiction.

Last year, there was the short lived Wil Wheaton Project at SyFy that had similar aims. Hopefully, Reactor, which premieres Thurs. July 16th at 11:30PM, will go much better. Huntsberger has 12 episodes to accomplish just that.

There’s a fun announcement video at EW by David himself that details Reactor more.

Finally, coming out today are two things we’ve been waiting awhile for. Namely, they are Jen Kirkman’s book about not planning on having kids, “I Can Barely Take Care of Myself: Tales From a Happy Life Without Kids” and David Huntsberger’s latest comedy album, “Explosion Land”.

Both will make you laugh as well as give you something to think about that you might have not have thought about otherwise like how flies perceive time or being labeled ridiculously as “childless”.