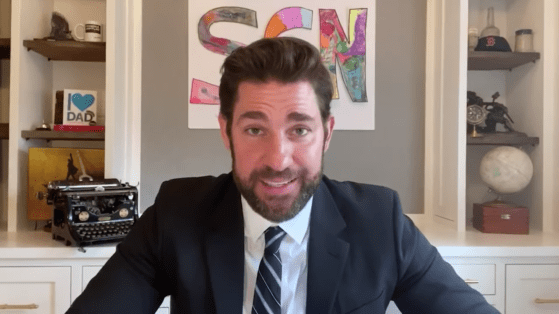 We can’t entirely be sure if John Krasinski envisioned Some Good News, a show that essentially could have been a very involved quarantine project, instantly becoming a viral sensation and something that a good chunk of the Internet looked forward to watching, making fan art for, and sharing due to it’s wholesome and heartfelt surprises.

Yet, it’s hard to say that selling the show to CBS All Access is entirely surprising either. The appeal of Some Good News that stretches across several different demographics while still being family friendly is very tempting for a network to bring onto their schedule.

Interestingly, Some Good News‘ move to CBS’ exclusive streaming service CBS All Access will have Krasinski step back to mostly an executive producing role, leaving room for a new host (or maybe a rotation of hosts?). Our votes are for John Mulaney, Baron Vaughn, and/or Beth Stelling.

We’ll just have to wait and see what exactly happens as the date for this network version of SGN is TBD.

CBS Gets a Bit Edgy with “No Activity” from Will Ferrell, Adam McKay, Funny or Die

This uncensored trailer for No Activity, which will be a marquee series of CBS streaming platform, CBS All Access, is decidedly (and thankfully) against type for the broadcast network.

Will Ferrell, Adam McKay and Funny or Die along with the cavalcade of your favorite comedy stars (Tim Meadows, Jason Mantzoukas, Arturo Castro,  Bridget Everett, Amy Sedaris, etc.) explore what happens in the downtime of detectives and criminals (i.e. the countless hours spent waiting for something to happen).

Of course, such downtime leaves room for plenty of decidedly non-professional police or criminal syndicate behavior. See for yourself in the trailer here.

No Activity debuts on CBS All Access on November 12th.

What seems fun about this series, based on the Aussie series of the same name, is that it takes the dynamic of a “buddy cop comedy” to the next level.

No Activity specifically “…follows two low-level cops who have spent too much time in a car together; two criminals who are kept in the dark; two dispatch workers who haven’t clicked; and two Mexican tunnelers who are in too small a space considering they’ve only just met.” It’s a buddy comedy on all sides of the law.

Ferrell and McKay’s Gary Sanchez and Funny or Die will be producing it with CBS to be seen on CBS’ digital platform, CBS All Access.

Since it’s a digital series and has a Ferrell and McKay stamp on it and the original Aussie star Patrick Brammall is starring in this American version, we are crossing our fingers that this will get to seem less like the multicam sitcom fare that represents most of CBS’ comedy brand and that another original cast member, the amazing Sam Simmons will be brought on as well.

It’s only a matter of time before TV and the Internet merge completely. One can already see the signs as HBO finally setting to offer a stand alone streaming option marks the already inevitable shift of television online.

CBS is now joining in on this movement with the launching of CBS All Access, which offers thousands of episodes of your favorite CBS programs as well as new episodes the very next day.

We hope this makes watching something like a comedian’s set on The Late Late Show with Craig Ferguson or an entire interview from The Late Show with David Letterman after it has aired a lot easier (i.e. being able to watch it all) than it currently is.

For now, CBS is offering a one week free trial of CBS All Access.