attack of the show

May 10, 2011
Uncategorized
attack of the show, garfunkel and oates

Garfunkel & Oates-“You, Me, and Steve” on Attack of the Show

Sure there’s talk of LARP-ing rules on Jeremy’s Dragon Table, but there’s also comedians Brendon Walsh and Susan Burke as a doctor and goth girl respectively.  If only this was real… 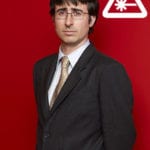 Recorded in front of a live audience at SxSW on 3.14 (that’s right, PI DAY)! John Oliver, as expected, CRUSHED. We spoke of the Queen, British comics you should know, the daily Daily Show routine, and of course, the C word. This show was fun to the funth power!!!

1) The Comedy Central Promo by Jay Larson for Jay Larson’s Half Hour Special this Fri. at 11:30PM… or is it?

2) Well, this doesn’t happen too often anymore, but it’s happening tonight… Patton Oswalt for free on the Comedy Palace at the Palace Restaurant.  Doors are at 8:30PM. Show starts at 9PM and I’m pretty sure it’s going to be packed to standing room only.  Or you can see him for the nominal fee of $25 at the Galaxy Theatre in Santa Ana at 8PM tomorrow.

3) [How to get rid of] Stains! by Megan Amram. Eat your heart out Billy Mays! [via Vice Magazine]

4) Garfunkel and Oates on Attack of the Show!!!

7) I found out that comedy is in fact more nerdy than video games as I had a girl intently interested in playing video games then blow me off once I brought up comedy to talk to a gay friend of mine.  Comedy is that nerdy.