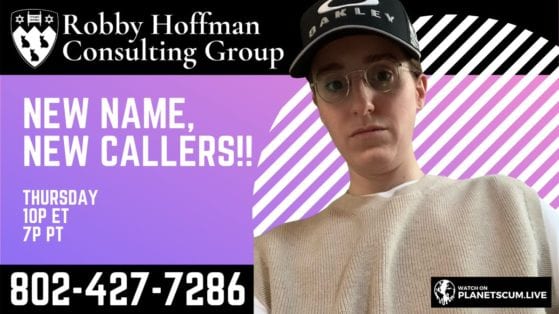 Dykevice with Robby Hoffman was and is one of our absolute favorite comedy live-streams throughout the entirety of this historic period of time we’re being subjugated to. Robby has proved to be one of the best sources of advice and McGill University ought to be proud to have Robby as one of their alumni.

This is just a friendly reminder that the show is still happening every Thursday, streamed live from Planet Scum at 7PM PT/10PM ET, but is doing so now under the new, slick moniker of “Robby Hoffman Consulting Group”. You can still call in or even leave a voicemail in order to get advice from Robby as well as the RHCG loyal who delightfully assemble every week to solve all your problems whether they’re the biggest or smallest in your life.

When all is said and done, you can (and should) donate to support the show and give thanks for the, honestly, priceless advice bestowed upon you from the Robby Hoffman Consulting Group.

You’re able to drink alcohol, but not quite able to rent a car. Also, if you’re a woman, there’s a whole new set of worries that comes with turning 21.  It’s yet another weird, but very important time in your life.

Knowing that, let life experts/hilarious people Jo Firestone and Aparna Nancherla talk you through it all in the latest episode of their Womanhood series at Riot.

The wonderful Sara Benincasa is well on her way to yet another book for Harper Collins. This time it’s going to be advice on how to be adult in age where that’s becoming more and more of a chore.

If you haven’t been following her giving advice pretty much daily on Tumblr by fielding random questions, then you should and see that Let’s Grow Up Together is probably going to be pretty great.

Since The Pete Holmes Show premiered yesterday, Pete got some “sage” advice from none other than Jon Stewart on the set of The Daily Show in order to prepare for the long haul.

Cathryn Mudon and Connor Ratliff web series on Blip.tv “I’m Too Fragile For This” voices probably everything you’ve wanted to say about dating in their latest episode, but were too worried that it might alienate anyone that would talk to you.

So, you can just watch, laugh, and internalize this to care of most of your dating neuroses hopefully.