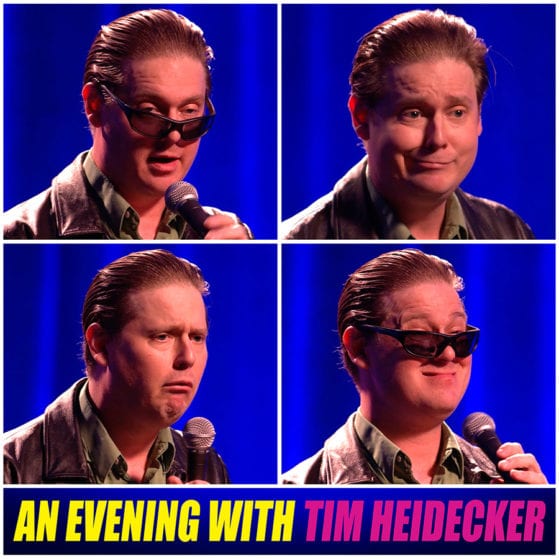 Tim Heidecker is a comedian, but very rarely does stand-up. Tim is much more renowned for his ultra absurdist work under the banner of Tim & Eric and, most recently, a decidedly non-comedic music album “Oh We Drift Away” with beloved indie singer-songwriter Weyes Blood.

Whenever Tim does stand-up, it shouldn’t come as a surprise that he has something up his sleeve besides standing on stage with a mic and straight-on telling jokes. There’s a subtle, but very subversive angle that Tim plays with satirizing what a good deal of mainstream stand-up is. So, for this hour special, An Evening with Tim Heidecker, you’ll notice that Tim makes sure that things, on the surface, look extra conventional and then show off the “cracks in the veneer”. It’s a fine line to walk, but Tim does pull it off.

You can see all of this for yourself in this trailer for An Evening with Tim Heidecker, then you can see the full extent of Tim’s version of stand-up when it premieres on Oct. 23rd at 6PM PT/9PM ET on YouTube.

Brendan O’Hare and Cory Snearowski present a quilt of vignettes, if you will, of their hometown Branchburg, New Jersey.

It’s very silly and, at the same time, oddly beautiful and that’s all the explanation that you’re going to get.