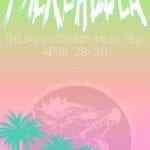 One of our favorite indie comedy theaters in LA, The Pack Theater, is doing a pretty sizable comedy/music festival at the end of this month.

Called Packchella, see what they have in store for Friday, April 28th-Sunday, April 30th.