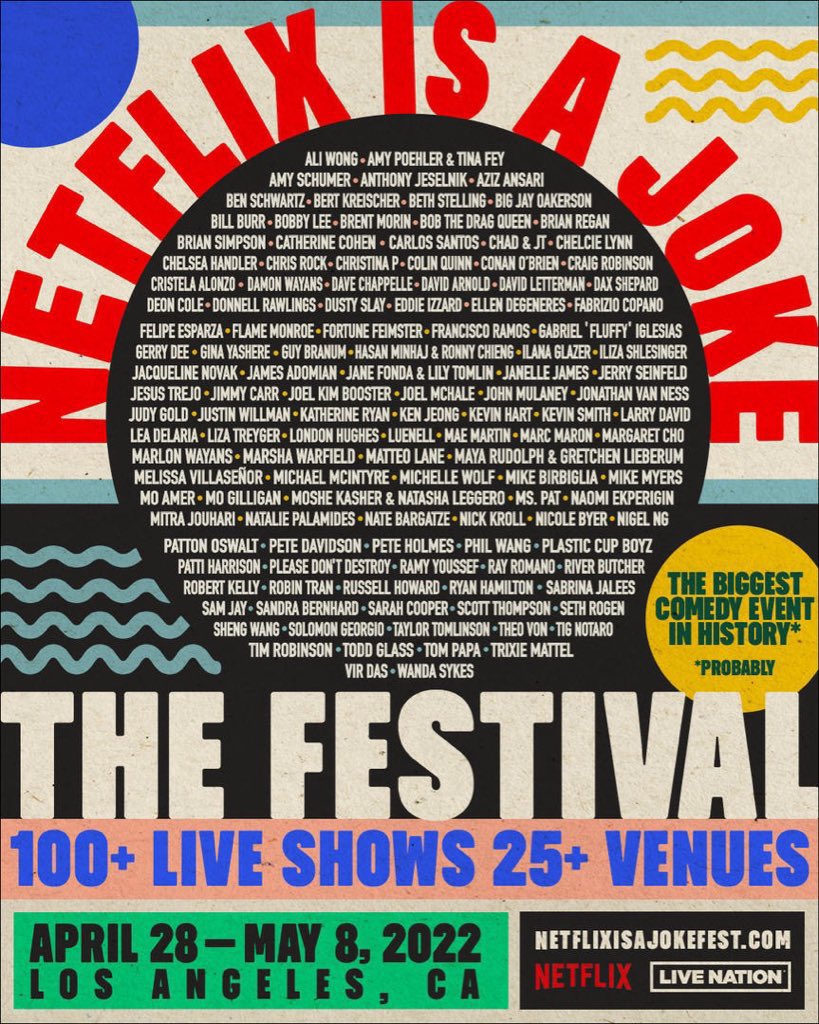 One of the first major comedy festivals to get postponed indefinitely because of COVID-19 was Netflix’s gigantic celebration of comedy that brought out all their biggest stars and their accompanying constellations, Netflix Is a Joke Fest. It was also going to be the first big comedy festival in LA in years (since Riot LA in DTLA ended its run).

For 2020, Netflix seemingly spared no expense to make the biggest comedy festival they could in Los Angeles and it was heartbreaking to see none of that happen in 2020 and have no idea if and when it would happen again.

Well, on this side of the pandemic, Netflix Is a Joke Fest was just announced to be back on, running from Thurs. Apr. 28th-Sun. May 8th, and Netflix is making sure to make it even bigger it would appear. Their stable of venues includes LA’s biggest (which wasn’t planned for 2020) including Dodger Stadium, Staples Center (now known as Crypto.com Arena), The Forum, and The Hollywood Bowl on top of beloved LA comedy haunts, old and new, The Comedy Store, The Hollywood Improv, Dynasty Typewriter, and The Elysian.

Oh yeah, there’s Dave Chappelle too as well as Aziz Ansari who are two of Netflix’s biggest gets within their talent pool, but have had the “cancellation” treatment. We have no doubt that their shows will sell out.

As they are billing it as the “biggest comedy event in history*, *probably” (SF Sketchfest does have way more programming and the Edinburgh Fringe is bigger than most festivals, period.), they’ve also filled out their line-up with plenty of folks (including many of our absolute favorites) that you shouldn’t miss if you’re putting the money down for Netflix Is a Joke Fest. That includes Todd Glass, Melissa Villaseñor, Guy Branum, Natalie Palamides doing Laid, Beth Stelling, James Adomian, Robin Tran, Mae Martin, and Sam Jay.

You can take a gander at the schedule here, then go get tickets starting this Fri. Dec. 10th at NetflixIsAJokeFest.com.