1) On Late Night TV last night-Jon Benjamin was on Conan and Don Rickles was on the Late Late Show with Craig Ferguson-part 1–part 2.

2) The Big Trouble in Little Tokyo Open at Señor Fish (which, if you haven’t guessed, was started by the Comedy Bureau and friends) is for all intents and purposes dead.  Full story to come later today.

3) Last night, the Comedy Store added a slew of new names of “regulars” to their walls. See if you recognize a few… [via the Comedy Groupie] 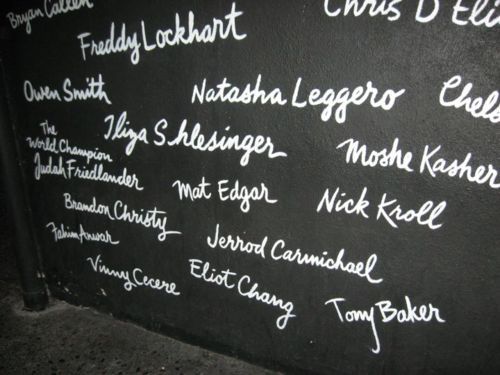 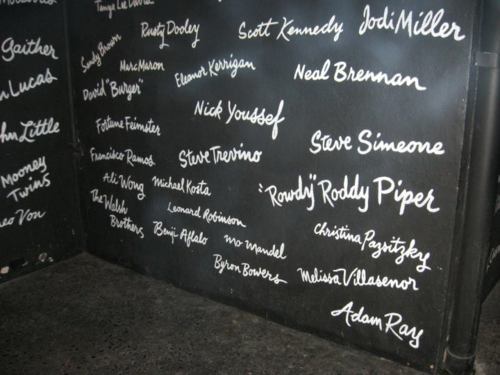 4) The hilarious Karen Kilgariff has come out with an album “Behind You” and it’s only $3.  Why you would any more convincing is beyond us.

6) Why not make a “Twitter” movie? Also, why not go to some of the stars of Twitter (Rob Delaney, Jenny Johnson, and Julieanne Smolinski) for some ideas?

7) TONIGHT: On Late Night with Jimmy Fallon you can catch both Steve Carell and Marc Maron.  We might actually contemplate staying in to watch this.

8) Doing promos as a comedian doesn’t have to suck?  Look at Reggie Watts plug Nando’s… [via Laughspin.com] Also, check out at interview with Watts by MTV.

10) Fuck Hotel California. It’s all about the Pet Hotel [via The Midnight Show]

11) Do These Glasses Make Me Look Stupid? Answers by Paul Danke for Earwolf.

12) OK, Steve Carell’s head does need to be the biggest in posters, but he should always have to have an argument to get it that way…

13) Again, Pete Holmes proves that bedside manor for doctors is overrated… as long as you’re not the patient.

16) At least, I don’t have to drag a stage across a parking lot today only to find a disgusting couple is making out right where I’m going to put the stage.  That’s nice.