UCB Gets a Letter About Bringing BIPOC to the Table 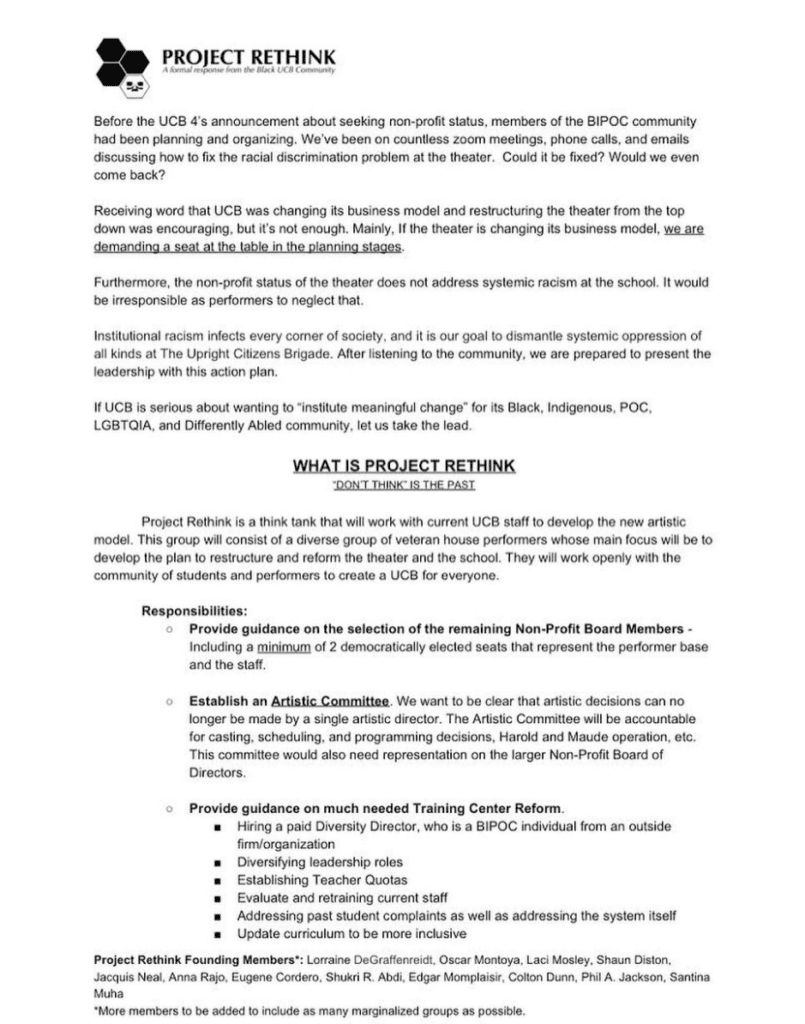 As you have seen, so many arts and media institutions are reevaluating and doing a top-to-bottom rebuilding of their organizations as to truly be inclusive and rid themselves from systemic racism.

In comedy, Second City has had their own reckoning from an open letter sent from black alums and staffers in changing their ways and now, The Upright Citizens Brigade, which is currently in the process of trying to become a non-profit organization as part of their structural reorganization, received a letter from Project Rethink (an organization of long time UCB BIPOC performers), that’s a “formal response from the Black UCB Community”.

Within the letter, which has made the rounds on social media over the last couple of days, they demand involvement on the selection of Non-Profit Board Members, go from an Artistic Director to an Artistic Committee, and detailed reform of their Training Center. You can read the whole letter below.

Recently I’ve been asked a lot about my experience as a black performer at @ucbtla here’s my answer. I love the Upright Citizens Brigade Theatre. I started working there in 1999. In the more than two decades that I’ve been affiliated with the theater, I have always felt like I had a creative space to call home. And I’ve watched over this time as the community of color has grown. The UCB 4 — Besser, Walsh, Amy and Ian have always been mentors and role models to me. Without them or the theater I don’t know if I would have the career I have today. that is my experience. One lesson we should all be learning right now is how to listen to everyone’s experiences. How not to discount or gaslight someone if they’ve had a different experience than you.  Over the past few weeks I’ve talked with other people who have encountered bias, prejudice and racism at the UCB theater and in the school. And these unfortunate experiences are preventing voices of color from thriving — from feeling comfortable — from feeling like they can truly call the theater home. institutional racism is real and exists everywhere. It’s not going to go away by just hiring a black person here or firing a racist cop there. It’s going to take fundamental change to the power structures of our institutions. It’s going to take self-reflection and opening minds to new ideas. (please still fire racist cops) each of us need to look at the institutions we are a part and products of and ask ourselves what we can do to change them for the better. More importantly, ask the people who have been disenfranchised what they think can be done to change for the better. Which is why I have signed on to #ProjectRethink along with the rest of my Black Indigenous People of Color community at UCB. Prejudice and bias are like a virus. Racism like the disease. We must expose it, call it out and eradicate it in all its forms. Especially in the institutions we love the most. If you read all this, thank you. If you are a UCB performer or student who has ever been disenfranchised at the theater, I am very sorry. I hope you will join me and I hope UCB will join us in making our institution a better place. #blacklivesmatter

Thus far, @UCBTLA has tweeted in response to this letter, “Thank you so much to Project Rethink! These are amazing ideas for our re-launch. Please know moving forward w/ your help is both welcome & necessary. We look forward to working w/ you and following your lead to make UCB theatre & school the inclusive community we know it can be.”

All the points that have been brought up in all of the comedy theaters/schools/institutions by performers, alumni, and staffers are great first steps forwards towards true inclusion and representation and ridding systemic racism and white supremacy through every crevice where it has crept in. Live comedy, as far as we know, still has a long way to go as the direction of the pandemic is almost as unsure at the current moment as when it started. With that in mind, we hope that these changes can sincerely be implemented with all this spare time before getting to legitimately reopening (whenever that will happen).