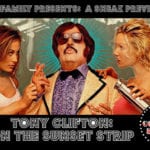 Cinefamily and The Comedy Store are Proud/Ashamed to present:

“Clifton is an emissary from the ninth circle of showbiz hell.” — AV Club Blog

“A figure so mesmerizing in his grotesquerie that his very existence becomes an act of theatrical alchemy.” — Entertainment Weekly

Andy Kaufman’s alter ego lounge singer Tony Clifton, along with his hot band and even hotter burlesque dancers, shocked Los Angeles audiences last May with the most hilariously heinous, politically incorrect act imaginable. Luckily for us, cameras were rolling. Be the first to see a sneak peek of what audiences and critics are still reeling about! Kaufman first discovered Clifton in ’69 in a seedy lounge in Las Vegas, and hired him for his historic “Carnegie Hall Concert”. In the ‘80s, Clifton appeared on Merv Griffin, Dinah Shore, Letterman, and even with Miss Piggy — before being thrown off the Paramount lot after showing up to a run-through of “Taxi” drunk with two hookers! Rumor has it that Tony may show up to this screening — that is, if he’s not sitting in the LAPD’s drunk tank again.