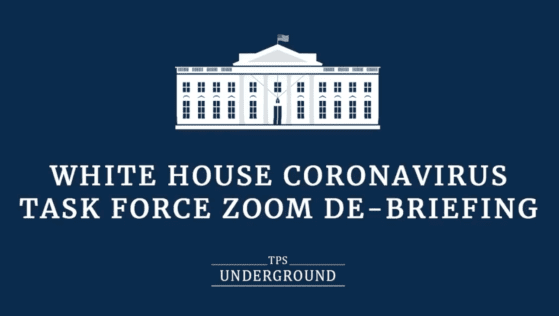 Armando Iannucci Joked About a Trump Movie Pitch on Twitter, But It Might Actually Happen with Julia Louis Dreyfus on Board

Film pitch.. Trump drugged and moved to a replica Whitehouse, where he carries on thinking he’s governing. Millions spent on hiring actors to play his staff, Senators, news anchors, people at rallies.
There you go. Studios, your highest bid please.

There is “interest from Hollywood” according to Armando, which shouldn’t be surprising as Iannucci is probably the best mind we have working today when it comes to political comedy and satire and Veep star Julia Louis-Dreyfus tweeted that she’s in for a key role in this supposed project.

Comedy sure has gotten fatigued by the ridiculousness of Trump, but we would welcome Iannucci’s take, which sounds pretty fun. Also, we’d like to add that Iannucci is one of the few people in comedy that should be able to sell a project from just a tweet.

According to Deadline, there is actual talk between multiple studios and deals being made for this to really happen.

Other details beyond this are sparse, but you should go take a look at Iannucci’s Twitter feed as it is full of pictures where Trump has been replaced by penguins. Hopefully, that figures in the movie, if it happens, as well.

While the Internet debates their biased nuanced takes on Michelle Wolf’s White House Correspondents Dinner remarks, forgetting that it has always been an unapologetic roast, we applaud Wolf for diving right into her set and not letting up for her whole 20 minutes with both poise and fury, especially since Trump skipped again, but clearly watched it on TV and whined about it on Twitter.

Also, thanks for Wolf letting us know that you can drop the F-bomb, which she did twice, on C-SPAN. Let’s hope that becomes a time honored tradition at the WHCD.

It’s a pretty great “trailer” of sorts for her upcoming weekly Netflix show The Break with Michelle Wolf.

By the way, it just so happens that Netflix just released an official teaser trailer for said show set for Sundays starting on May 27th.

It shouldn’t come as a surprise that a childish, ill-tempered, egotistical, sociopathic bully who is unfortunately President of the United States will yet again ignore the White House Correspondents Dinner, which is essentially (and has thankfully always been) a “POTUS Roast”. It should be noted that if you can’t take a joke, that’s one big reason amongst many big reasons you shouldn’t be in a position that used to be referred to as “leader of the free world”.

In an interesting twist, White House Press Secretary Sarah Huckabee Sanders will be in attendance and other White House staffers are encouraged to attend as well.

Michelle Wolf is hosting this year’s White House Correspondents Dinner and we have no doubt that will pull absolutely zero punches. What will be interesting to see if Trump tweets about it in real time and if Wolf would potentially to respond to it during the broadcast. That may sound crazy, but, then again, crazy is pretty normal these days.

Our Cartoon President Picked Up for 7 More Episodes at Showtime

Our Cartoon President Picked Up for 7 More Episodes at Showtime

We hope that this backend order means that they’ll pull even less punches in satirizing the Trump Administration.

The President Show on Comedy Central is currently on hiatus, but that won’t stop from Anthony Atamanuik from making sure his Trump gets a word in after the POTUS had to read complete sentences from a teleprompter.

So, without further adieu enjoy the President Show’s response and the response’s response to the State of the Union.

The very first State of the Union Address will be delivered by President Trump tonight live at 9PM EST/6PM PST.

Of course, late night will not miss an opportunity to get right in on the aftermath as soon as POTUS finishes attempting (maybe) to speak like an adult.

So, The Late Show with Stephen Colbert will air immediately after coverage ends on CBS (meaning it’ll be primetime here on the West Coast). He’ll have the hosts of Pod Save America: Tommy Vietor, Jon Favreau & Jon Lovett, 2 Dope Queens’ Jessica Williams & Phoebe Robinson as guests.

Trevor Noah and Jordan Klepper will go for a one-two punch by both going live after the State of the Union with The Daily Show and The Opposition at 11PM EST/8PM PST & 11:30PM EST/8:30PM PST respectively.

Watch First Episode of “Our Cartoon President” Before Premiere

Thanks to Showtime, you can see what the cartoon spin-off from Colbert’s cartoon Trump segment on Late Show has in store for us all as the full premiere episode is on YouTube courtesy of the premium cable network.

We watched it and know that they absolutely pull no punches, though it stings slightly less since it’s animated. See for yourself here.

The series premiere for Our Cartoon President is set for February 11th at 8PM on Showtime.

Conan Without Borders might do more good for America’s image than a lot of what the White House is currently doing.

You can see for yourself in these previews for Conan’s latest trip to Haiti.

Perhaps, comedy is the best medicine and (possibly) form of diplomacy?

Well, this is just one of those things that history teachers will have to remind their future students was a real thing that happened in 2018.

The very first preview clip released of Chappelle’s new special, Equanimity, has Dave talking about voting in what is one of the most infamous American elections in U.S. history last year.

Hopefully, that’s a good hint of what’s to come. Watch it here.

Look for Equanimity on Netflix on New Year’s Eve.

Coming to Showtime on Sunday, February 11th at 8PM to Showtime will be the series premiere of Our Cartoon President, an entire animated series born out of the recurring cartoon Trump segments from The Late Show with Stephen Colbert.

It should be noted that this will be the second televised comedy series entirely dedicated to satirizing Trump as President and, as it’s animated, it seems much less terrifying than the reality that it’s making fun of.

See for yourself in the teaser here.

It sure doesn’t seem like her first time doing stand-up on the late night circuit. See for yourself here.

Donald Trump is a preposterous golem who is afraid of Mexicans. He is so afraid that he wants to build a twenty-billion dollar wall that everyone knows will accomplish nothing. So we’ve purchased a plot of vacant land on the border and retained a law firm specializing in eminent domain to make it as time-consuming and expensive as possible for the wall to get built.

The money comes from their latest holiday “surprise mailers” campaign, which quickly sold out.

We can only imagine (and hope) that Cards Against Humanity will be doing more stunts like this under the Trump Administration.

The Dollop Hits Their 300th Episode, Does a Back-to-Back Episode on Trump, and Is Also Headed to Thailand for a Podcast Festival

They did a devastating set of back-to-back episodes on Trump showing why the 25th Amendment should he have been enacted for his impeachment on Day 1 of his presidency. In fact, their go-to designer, James Fosdike, made a special design (seen above) for the occasion that you can buy on a t-shirt.

On top of that, hosts Dave Anthony and Gareth Reynolds will be doing their first episode in Thailand, a place largely untouched by English language podcasts for The Koh Samui International Podcast Festival. It’ll be a whole week of fun just between Aussie podcast The Little Dum Dum Club and The Dollop in June 2018.

We cannot wait to see what Dave comes up with when tackling Thai history, not to mention how he’ll end up pronouncing everything.