punch up the jam 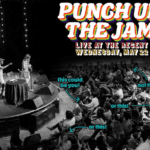 Demi Adejuyigbe and Miel Bredouw have made themselves into some of the best song parodists around via their hit podcast Punch Up The Jam. Just recently, their “punch-ups” of Enya’s Only Time, Lil’ Nas X’s Old Town Road, and Shania Twain’s That Don’t Impress Me Much show how sharp, quick, and oh-so-damn-fun they are when it comes to re-engineering pop songs inside out.

That means you should absolutely go to their live taping at the Regent in DTLA near the end of May. TIckets are $15 right now and $20 on the day of. Go get those advance tickets here (do so quickly before they sell out). 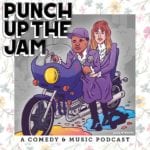 A favorite podcast of ours, Punch Up The Jam, is doing another live edition, this time at UCB Sunset.

Hosts Demi and Miel will be taking pop songs and “making them better” in person on Sunday, September 30th at 9PM and, unsurprisingly, advance tickets are sold out. However, watch as the date gets closer to see if tickets are released and, as always with UCB, there will be a stand-by line on the night of the show.

Within the ever burgeoning art form of comedy, musical comedy is unfortunately oft-maligned, especially when it comes to parodies of popular songs.

That being said, Miel Bredouw (YouTube star, writer) and Demi Adejuyigbe (currently a writer on The Good Place) not only do a smash up job of parodying songs that they feel they can “punch up” with an extremely clever change in the lyrics (that usually takes on a much more nuanced existential perspective than the original song), but also dissecting those songs every which way they can, lyric-by-lyric. That formula plus their irresistibly charming chemistry combine to make up their great podcast Punch Up The Jam.

Miel and Demi have wonderfully tackled and punched up anything from Auld Lang Syne to Friday I’m in Love to Mambo No. 5 (done live at SXSW).

So, get in on Punch Up the Jam right here, right now.