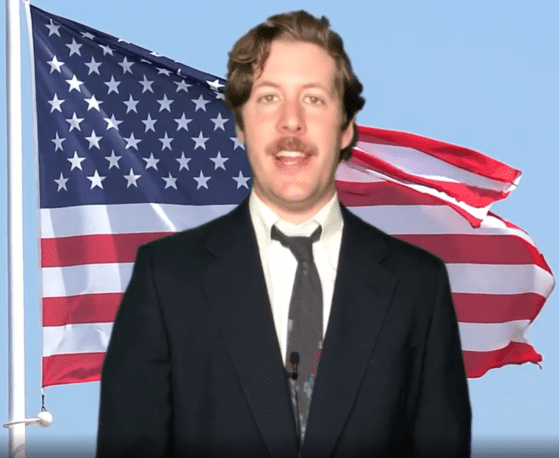 With the DNC passed and Joe Biden officially becoming the Democratic Nominee for POTUS in the 2020 General Election, there are still a good amount of folks that are stirring about having to settle for Biden with the alternative being the world (probably) ending (for real this time) under another 4 years of Trump.

So, Sam Taggart is setting aside his clever satirical characters to spread a message of support, albeit a special kind that has nothing to do with the race for POTUS, for Biden.

Amy Sedaris just want to let you know that crafting can be very unsafe in many regards including snakes.

Please watch At Home with Amy Sedaris’ old school PSA about crafting safety here (that feature some of the most innovative “deaths” ever in PSA).

Alamo Drafthouse Enlists Janeane Garofalo for Latest and Greatest PSA to Not Talk, Text, Etc. at the Movies

As Alamo Drafthouse expands further and further across the nation, these PSAs explaining why you shouldn’t talk, text, or be on your phone in general seem to only get better and better.

Just watch their latest one with Janeane Garofalo that really gives a historical context to why you shouldn’t be on your phone during the movies.

Educational drug program in school would be more effective if they were like this.

Karen Kilgariff and Drennon Davis have been two of our favorites for some time on their own, but they’ve recently joined their brilliant musical comedy stylings together and make hilarious and wondrous music together.

Now, the whole country got to see what we’ve been lucky to see for the last few months when they played an anthem for getting too high on Conan.

Season 3 of Inside Amy Schumer premiered last night and is in as great a form as it’s ever been.

The parody of Friday Night Lights that also serves as a subtle PSA about rape in football and Tina Fey, Patricia Arquette, and Julia Louis-Dreyfus meeting in honor of a Last F’able Day will show exactly what we’re talking about.

For PSAs that encouraged Californians to conserve water during this drought, Conan O’Brien and Andy Richter had a talking toilet.

Of course, there was some great shenanigans that happened in between and after takes, which, thankfully, are captured in the latest edition of Conan Scraps.

The amazing Walsh Brothers know something that, apparently, we all don’t know, which is that there are gators always lurking around.

Watch and see all exactly the danger we’re in at an edition of one of favorite shows in town, The Super Serious Show (that just turned 4 years old!).

True friends always hear each other out and tell each other the unfiltered truth. That’s “the lesson” that comedians Dan Van Kirk and Jay Larson want you to learn from the latest episode of Van Kirk’s Nerdist web series DVK.

Watch it now and take the message to heart.

Andre Hyland who you might know as Jesse Miller gives us all some helpful tips about pool etiquette, specifically when it comes to peeing in a pool. You’re going to want to know this for the rest of the pool parties you’ll be attending this summer.

Our favorite seemingly abusive husband and father (and incidentally the only one we know) Rick Jablonski (Tony Sam) gives his strongly worded, but very informative and helpful message on the dangers of fireworks this 4th of July.

Watch and listen, even if he looks like he’s day drinking in a closet.

For Comedians, It Definitely Doesn’t Get Better, It Gets Worse

June 27, 2013
Uncategorized
comedy, it gets better, it gets worse, psa

While the decision that DOMA is unconstitutional has made a promise from the “It Gets Better” campaign true, comedians don’t get the benefit of that maxim. Comedians Grant Lyon and Dave Waite have put together a web series of talking heads of several very funny people that you may or may not know, but hopefully do, like Andy Peters, Lachlan Patterson, Jim Hamilton, Ryan Singer, Tony Sam, Heidi Hayward talking about how doing comedy has almost never gotten better (losing jobs, relationships, getting various things thrown at you, being told you’re not funny etc.) except for the fact that they don’t want to do anything else.

Take it as a PSA to not do or do comedy or something where you witness how delusional we all have to be to keep doing comedy, but watch It Gets Worse because it’s pretty great. Also, you can submit your own story of comedy getting worse; details at end of each video.

Here are parts one, two, three, and four.