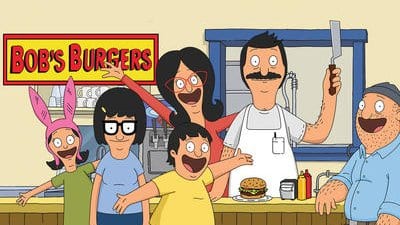 It would seem that the triumvirate animation block on Fox that includes The Simpsons, Family Guy, and Bob’s Burgers will be intact for a long time to come. Announced today, the Emmy award winning award series will be getting its 11th season.

Well, actually, Loren Bouchard and company have been on work on the 11th season already. That has us curious as to whether they’ll have any episodes dealing with the pandemic and/or perhaps all of this will be over by the time 11th season premieres.

In any case, a much deserved congratulations to Bob’s Burgers.

H. Jon Benjamin’s “Failure Is An Option: An Attempted Memoir” Out Now

Though it may not come as a surprise to you that a man that released a jazz album where he played piano without knowing how to play piano wrote a memoir about failure, H. Jon Benjamin’s love affair with failing is something to behold.

Failure Is An Option: An Attempted Memoir really delves into the nuances and various facets of failure, specifically in Benjamin’s life, in his wry fashion and is undoubtedly a cathartic read in these times we live in.

True to form, Benjamin didn’t even praise this book that he wrote when appearing to promote it on Colbert this week, which, ironically, is a pretty clever sell for a book about screwing up being OK.

You can now get Failure Is An Option from Penguin Random House here. 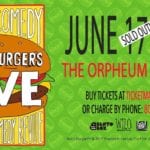 The occasional Bob’s Burger’s Live event is coming this summer to DTLA’s Orpheum Theatre. One date has already sold out and they have added a second date on June 18th that you’ll hopefully be able to snag tickets to. As the flyer says above, it’s got music, comedy, and a musical comedy revue (i.e. pretty much everything you’d want out of a live Bob’s Burgers event)

So, the tickets for the second date go on sale on this Friday, April 7th at 10AM PST. Mark the time, make a reminder, and make sure you got some coin to spend.

The rest of our listings or comedy shows, events, open mics, and maps can be found at www.thecomedybureau.com. 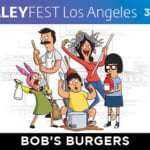 Paleyfest is just around the corner and one of the shows that’s on the line-up is none other than Bob’s Burgers.

The cast and creators will be on stage together to share stories, exclusive behind-the-scenes details, and news about the show that the audience will get before mostly everyone else.

Paleyfest is taking place at in the heart of Hollywood at The Dolby Theatre on Friday, March 24th at 7:30PM. Tickets are going from $30-$135 and you can get them here.

Amidst all of the things unveiled, debuted, revealed, teased, and announced at Comic Con this past weekend, Bob’s Burgers got to release some juicy details coming up including the release of the Bob’s Burgers album in December as well as their latest movie parody, which will be a very fun twist of Alien.

For some reason, this great sketch on Inside Amy Schumer featuring Jon Benjamin as a lawyer who can’t do anything about mass shootings was cut from airing even though gun control is absolutely the hot button issue in the U.S. right now.

All the filibustering, sit-ins, and general demand from an overwhelming majority of Americans for any sort of action on gun control make the sketch so timely that it has now been posted online.

Whether it be a secret to weight loss or what just might give you cancer, there are many very premature, non peer-reviewed scientific studies that often getting peddled as scientific breakthroughs by the morning news and even TED Talks.

John Oliver and his team at Last Week Tonight exposed the misinformation that has been spread for years in their latest deep dive segment.

They also have a fun bit where Jon Benjamin gives a B.S. TED-style talk.

IFC’s is really branching out this year.

With anything ranging from Portlandia to Maron to Comedy Bang! Bang! to Documentary Now!, IFC is really trying to make its mark with programming that fall under their banner of ‘Always On Slightly Off.”

The slate of series that they’re developing really takes that moniker to new territory.

-Todd Barth Can Help You-a new series from Bryan Cranston, along with Clay Graham and Steven Weber, follows an insurance adjuster who decides to, all of sudden, make a go at being a new age self-help guru.
-Canterbury Tales-Set around Hollywood’s first punk rock club in the 70s, this Allison Anders (Mi Vida Loca, Grace Of My Heart) and Terry Graham (drummer for seminal punk band The Bags, Gun Club, and author of Punk Like Me) series follows a brand new spankin’ band trying to make it.
–Detective Lady-BoJack Horseman’s Kelly Galuska has made a noir-ish comedy focused on a play-by-her-own rules detective.
-How to Rig an Election-Adapted from Allen Raymond’s book How to Rig An Election, Tom Ruprecht (Late Night with David Letterman, The Nightly Show with Larry Wilmore) is set to explore the dark side of political campaigning that people are becoming more and more aware of everyday.
–Grand Lake-From WGA award-winning Gretchen Enders (Gortimer Gibbon’s Life on Normal Street), this dark comedy circles two friends who wish the worst for each other.
-Laughs in Translation-The Above Average web series hosted by Brooks Wheelan where he tries to discover what makes for comedy around the world might be getting an upgrade to linear TV.
-Living With Yourself-Emmy and Peabody award-winning Tim Greenberg (Daily Show) has made a layered, philosophical comedy that trails a frustrated copywriter desperate to become a better person who goes through a unique treatment to do so.
-This Land Is Ours-This series from Vicki Pepperdine and Joanna Scanlan (Creators of Getting On and Puppy Love) shows squatters in Harlem squaring off with billionaires to keep the building they love.
-Jon Benjamin’s 100 Erotic Nights-Jon Benjamin delves into confessions of passion and betrayal all while still being Jon Benjamin.
–A late night talk show Hosted by Jim Norton-A newer version of Norton’s talk show that he briefly had on Vice.

Without Much Musical Ability to Really Speak of, Jon Benjamin Has Made a Jazz Album “Jon Benjamin-Jazz Daredevil: Well, I Should Have…*”

Of the many comedic talents of Jon Benjamin is known for, singing or playing instruments or doing anything musically aren’t any of them.

However, that didn’t stop Benjamin from making a jazz album with actual, very accomplished jazz musicians playing along side him or, as some musicians might say, “carry his ass”.

Coming this Fri., Nov. 27th, off of Sub Pop Records, Benjamin will releasing an experimental record of him attempting an entire jazz album entitled “Jon Benjamin-Jazz Daredevil: Well, I Should Have…* (*learned to play piano).

Let Jon himself tell you more about the project and, most importantly, why he’s doing it.

If you’re a fan of avant garde jazz and experimental comedy, like we are, you can pre-order this record from Sub Pop right now.

One more round for (part of) the Parks and Rec gang?

Parks and Recreation creator Mike Schur and co-executive producer Alan Yang are back together with Aziz Ansari AKA Parks and Rec’s Tom Haverford for 10 episodes of a new series at Netflix.

Plot details are scarce, but the cast will feature Jon Benjamin, Noel Wells, and Eric Wareheim and Smashed and Spectacular Now director James Ponsoldt will direct.

No premiere date has been set, but the series is already in production.

It’s things like this that are making Netflix considered to be worth more than CBS, Viacom, and Twitter.

If you’re in or around Chicago or Boston this spring, get your calendar out and mark these down.

May 26th-30th, The Onion and A.V. Club are bringing The 2nd Annual 26th Annual Comedy Festival to venues throughout Chicago with the comedic stylings of John Mulaney, Kyle Kinane, Eric Andre, Joe Mande. panel discussions with writers from The Onion and The Simpsons, 7 Minutes in Purgatory with Ian Abramson, and more. You can get your tickets this Friday here.

If you don’t live near Chicago or Boston, you have plenty of time to get plane tickets and hotel reservations.

When on Conan this week, he revealed why he was nervous that he would have to trot out a British accent for an audition and a particular list of a certain type of bear that he’s proud to be on .

Perhaps, one day, some online streaming service will smartly revive Jon Benjamin Has a Van.

Several weeks ago, we reported on the artisanal, small batch mystery sacks that were going to be sold by Jon Benjamin and Eugene Mirman at The Flotsam General Store.

We’re happy to tell you that you can now buy for those closest to you or the weird co-worker you got in a round of Secret Santa or even yourself, your very own Flotsam General Store Mystery Sack filled with “artfully-curated, hand-conceived item”.

Please note that only the small sack is available right now, but a limited run of a 1000 will go soon as do all artisanal, small batch things put together Brooklyn are.

As with every year, we suggest that you don’t miss out on this festival and everyone who is on it. Buy your tickets now.

H. Jon Benjamin on Being Bad at Most Jobs That Aren’t Comedy

This first episode has the awesome H. Jon Benjamin discussing how most other jobs he has done that weren’t comedy did not go well and, even then there was that one show where Dave Attell opened and yet it still managed to be, well, you should just watch and hear what happened now.