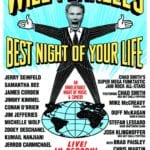 July 9, 2018
Uncategorized
jim jefferies, netflix, stand up, this is me now

The last time Jim Jefferies seem to reach another level in comedy here in America was when he went on a rant on gun control in a comedy special.

With his next special “This Is Me Now” coming to Netflix on July 13th on the heels of his current weekly satirical show on Comedy Central, we’re intensely curious as to what Jefferies will be serving up. There are undoubtedly higher expectations this time around, considering that there is a trend right now for comedy to have a message of some sort, and Jim likes taking on traditionally controversial topics.

There is a teaser for This Is Me Now, but there are no actual bits from the special in it. As far as we can tell, Jim is poking fun at the fact that he has to “grow up” with his comedy while, in actuality, doing just that.

Comedy Central Quadruples Down on Political/Topical Comedy Front with “The Opposition with Jordan Klepper”, a “Goatface” Sketch Special, Extending “The Jim Jefferies Show” and “The President Show”

Comedy Central announced a bunch of things today, many of which show where the cable network is setting their sails for. The prevailing winds are political and topical satire and, as such, Comedy Central will:

–Have The President Show take over the midnight slot from @midnight on September 28th for an additional 7 episodes
–Position “The Opposition with Jordan Klepper” as the new companion to The Daily Show, starting September 25th, that will specifically satirize the world that folks like Alex Jones see/”artistically express”
–Give an hour long sketch comedy special to Goatface Comedy, a group comprised of Hasan Minhaj (The Daily Show), Asif Ali (Wrecked), Fahim Anwar (There’s No Business Like Show Business), and Aristotle Athiras that satirizes everything from their unique perspectives
–Extend The Jim Jefferies Show for ten more episodes, which will begin on September 19th after a few weeks off.

As Netflix, FX, and HBO continue to dominate in the original scripted comedy and stand-up, Comedy Central is, consequently, putting a lot of their chips down on topical/political comedy and satire.

Hopefully, this will work out for them and all of these shows/specials just like it has for Colbert in being the late night leader as the most politically outspoken big time late night host.

For quite some time, Jim Jefferies has always had a flirted with controversy in his comedy in a sharply clever way. Yet, his recent take on gun control took shone quite a spotlight on him here in America.

Now, tonight, Jim will bring you more of what he thinks about what’s going on as his eponymous show premieres tonight at 10:30PM on Comedy Central.

Jim Jefferies, who has always been an unfiltered comedian that dives head first into touchy subjects, is now getting a weekly late night show on Comedy Central where he can offer his take on the insanity that’s going on that week.

Jefferies’ recent Netflix special got a lot of attention for his bit on gun control and Jim also made headlines when he told Piers Morgan to “f*ck off” on Real Time with Bill Maher.

There aren’t any specifics on the format (or even an title), but we hope that Jefferies allows for plenty of debate on his show.

In addition to binging Albert Brooks’ movies this weekend, you should also watch this. You’ll have time to get through all of it because the real 4th of July fireworks aren’t even until Monday.

Though Hollywood party stories are well trodden territory for late night, a great story is still a great story no matter how familiar the setting.

Such is the case with Jim Jefferies doing a private gig with celebrities present, then having a night he will never forget with Al Pacino as well as Warren Beatty in the background. It’s a classic Hollywood party story through and through.

He told the story in full on last night’s Kimmel.

Now with a family, one might think that Jim Jefferies might ease up in his playing-with-fire style of stand-up, but it’s clear in this trailer that Jim Jefferies will be the very same edgy Jim Jefferies. With this latest special Freedumb on Netflix, he just points his unfiltered lens at what the world is like now that he has done the whole family thing for awhile.

Watch the trailer for Freedumb here, then look for it to start streaming on July 1st.

Netflix Announces Their Next Batch of Comedy Specials Including Ones from Ali Wong, Bo Burnham, Iliza Shlesinger and Jim Jefferies

You’ve got to wonder if any of the other big streaming services will try to keep up with Netflix’s comedy specials output.

It’s been a long time coming that Ali Wong has been gearing up for a special and the next special from the brilliant Bo Burnham will undoubtedly be a must-see.

Mark your calendars on the following Fridays:

The sequel to Henry Phillips’ Punching The Clown has moved forward very quietly. We heard that it was going into production and then, just over two weeks ago, Phillips himself tweeted that it was “in the can”.

Punching the Clown 2 is now in the can. Look out for it next year! pic.twitter.com/joR73mq8xI

So, not only do we have to look forward towards a release, perhaps, sometime next year, but, the cast for Still Punching The Clown is pretty damn great. J.K. Simmons, who you probably saw get sociopathic in Whiplash, Sarah Silverman, Jim Jefferies, Tig Notaro, Doug Stanhope, Mike Judge, Drunk History’s Derek Waters, Nikki Glaser, and more are all being featured in the film.

Recently, Jim Jefferies had the luck of dropping into the Hollywood Improv while Paul McCartney was in the audience. Knowing that, Jefferies put forth his A-game and was surprised at the results as he recounts on Conan.