Kenny DeForest wonderfully marks his second late night set, this time on The Late Late Show with James Corden, and does quite the remarkable job picking apart toxic masculinity and just how abjectly dumb it is. Also, he gives a generous nod to Queer Eye while doing so.

Leave it to the always charming Nore Davis to showcase the follies of toxic masculinity and how it keeps men from enjoying many of life’s simple pleasures and crush it during his set on Conan.

It’s a set worth watching more than once. Do so here. 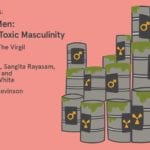 A special edition of Drunk Ed. is going to talk about one of most pressing issues right now, toxic masculinity and its systemic abuse, with a great line-up of folks involved in and throughout comedy, entertainment, etc. (i.e. industries where sexual harassment is being purged most harshly right now).

Not only will be an important and cathartic evening, but proceeds will go towards RAINN (Rape, Abuse & Incest National Network), the largest anti-sexual violence organization in the U.S.

Over the last few weeks, toxic masculinity has had several of its many, many heads lopped off with the unstoppable wave of sexual assault, harassment, and rape charges that have come to light.

One would hope that it’s a sign that “different time back then” is over and will not be tolerated anymore kind of like what happens in this darkly comedic, short film “men” from Jon Daly and Gil Ozeri.

(note: this is technically NSFW even though the social commentary here is important).