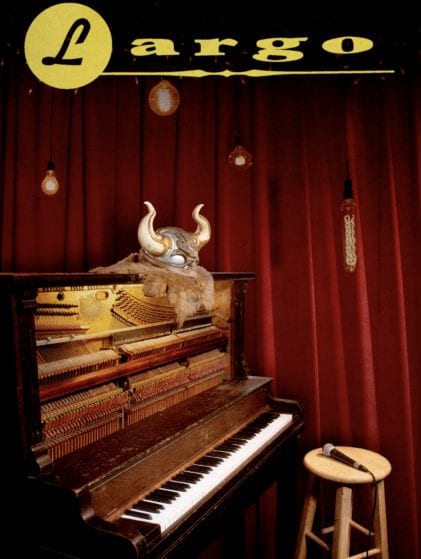 Largo at the Coronet Theatre Is Officially Back Starting in July

June 25, 2021
News
anthony jeselnik, ben schwartz, fortune feimster, fred armisen, margaret cho, patton oswalt, pete holmes, tom papa
One of LA’s most treasured venues when it comes to comedy is the Largo at the Coronet Theatre. It was home to a big handful of the best and biggest acts in LA that wanted to play a special sort of intimate crowd. Patton Oswalt, Sarah Silverman, Ben Schwartz/Thomas Middleditch, etc. etc. all played here regularly.
Then, for the pandemic, Largo had to close its doors like every other venue in town and its fate seem to hang in the balance of however long they would have to keep it dark. Thankfully, Conan O’Brien and Team Coco opted to tape the last leg of Conan at Largo and now the venue is set to reopen its doors with the same sort of very special, very intimate, exclusive performances that they’re renowned for.
Thus far, their schedule is as follows:
July 9 – Anthony Jeselnik and Enemies
July 10 – Ben Schwartz. Friends. Improv.
July 11 – Patton Oswalt and Friends
July 12 – Margaret Cho and Friends (with Atsuko Okatsuka & Demitri Martin)
July 13 – Pete Holmes: Living At Largo (with special guests Reggie Watts, Lara Beitz, and more!)
July 14 – An Evening with Fortune Feimster and Tom Papa (with special guest Bill Burr)
July 15 – Fred Armisen and Friends
July 16 – Chelsea Peretti and Friends
Tickets go on sale for all of these shows on Monday, Jun. 28th at 10AM PT and you best make a reminder as they will very likely sell out very fast like they used to in the before times.

If you’ve needed an emotional or spiritual pick me up in the form of a stand-up set because you’re feeling like you’re not being your “best self”, let Tom Papa assure you that you’re probably OK.

It’s the core philosophy of his latest appearance on Conan. Please enjoy and feel alright about being OK here.

Tom Papa got to do both stand-up and panel for his latest appearance on Conan, which really just made it a nicely done two-part stand-up set.

Watch parts one and “two” here.

The latest story from This Is Not Happening with Ari Shaffir has Tom Papa showing us why being able to intrude into a child’s life as their parent in 2015 hasn’t been a good thing necessarily.

We’re going to guess that you’d wish your parents had seen this story when you were a kid (or right now if you’re currently a kid).

The names Ben Affleck and Matt Damon together again should peak your interest along with the pairing of Alyson Hannigan and Tom Papa, but, even more intriguing than that is, if this gets picked up, it will be another thing that Jimmy Kimmel will say that Damon did not write.

Tom Papa appeared on Conan to do a late night set and takes now a sort of non-traditional stance on smoking by defending it. He’s trying to bring the kale and steak eaters together as well through this set.