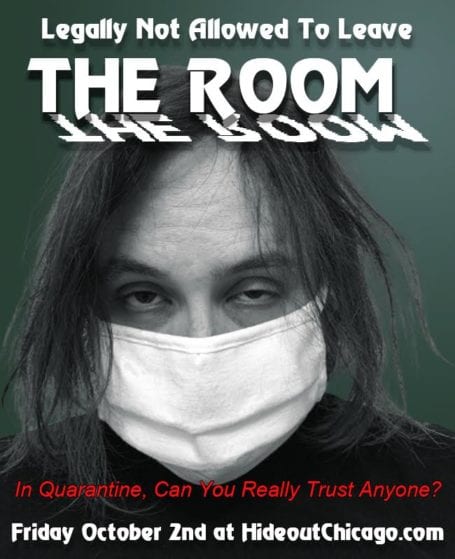 Pick of the Day: Hideout Online Presents: Legally Not Allowed to Leave the Room 10/2

As co-creator of one of the most hilariously chaotic variety shows we’ve ever seen, Late Late Breakfast, we trust in Tyler Jackson to make one hysterical whirlwind of a show when it comes to recreating the cult classic, Tommy Wiseau’s The Room, via a live-stream, with many of the best comedy folks from all over the country.

LEGALLY NOT ALLOWED TO LEAVE THE ROOM is a complete, feature-length re-imagining of the cult classic film THE ROOM. Part parody, part loving homage, it is The Room remade by over 50 teams of artists, using whatever they had around them during the quarantine. Musicians, comedians, puppeteers, animators, and video artists transform the original film from a bizarre melodrama into a kaleidoscope of bad accents, even worse wigs, stock footage, acid trips, prank shows, body doubles, and Lynchian horror.

No matter how this goes, it ought to be a damn hysterical time and will assuredly be less insane than what reality has presented us.

Legally Not Allowed to Leave the Room is set to stream this Fri. Oct. 2nd at 6PM PT/8PM CT/9PM ET. It’ll be presented by The Hideout in Chicago and tickets are $5 (proceeds go to saving stages via NIVA). Go get more details and tickets here.

The Room to Play Nationwide for One Night Only This Wednesday

Though probably not through any design that Tommy Wiseau had thought of when he was making The Room (i.e. a tell all book about the making of his movie being made into an awards contender movie), his best/worst classic The Room is actually getting one night in hundreds of theaters across the United States.

That night is tomorrow, Wednesday, January 10th. You can find tickets for a theater near you (there should be plenty) here.

Tommy Wiseau’s The Room holds a special place in cinematic history much in the same way Florence Foster Jenkins once did for opera.

Just like Florence Foster Jenkins got a pretty good biopic about how her awful singing was celebrated, the story behind The Room, from which the best selling book The Disaster Artist was written by Greg Sestero, is similarly getting a movie of the same name directed by and starring James Franco.

From the looks of the first full trailer, Franco really gets into the whole world of Wiseau, both emphatically and honestly. Also, James’ brother playing Wiseau’s friend adds another fun layer to this whole thing.

The Disaster Artist will play in theaters on December 1st.

First came the cult best/worst movie The Room from Tommy Wiseau. Then, came the book about the making of The Room called The Disaster Artist by Greg Sestero. With so many different facets to the myth of both Wiseau and The Room, the making of feature film adaptation of why any of this happened seemed inevitable.

Now, that time is here as James Franco’s movie based on The Disaster Artist is set for a theatrical release on December 1st.

Franco, as it would appear, seems to do a pretty good job as Wiseau.

See for yourself in the trailer (and also enjoy a supporting cast of Seth Rogen, Dave Franco, Paul Scheer, and Charlyne Yi).

A24 Is Giving a Theatrical Release James Franco’s Comedy About the Making of Tommy Wiseau’s The Room, “The Disaster Artist”

May 21, 2017
Uncategorized
a24, james franco, the disaster artist, the room, tommy wiseau

A24 Is Giving a Theatrical Release James Franco’s Comedy About the Making of Tommy Wiseau’s The Room, “The Disaster Artist”

Yes, James Franco really did make a comedy, The Disaster Artist, about the making of the cult comedy, “best worst” movie The Room from Tommy Wiseau. After making noise on the festival circuit, A24 has opted to give it a release in theaters for a possible awards run.

We’re on board that move for two reasons. One, it’s a comedy making head way into awards contention that always biases towards heartbreaking drama and two, it’s a nifty sounding alternative to whatever holiday fare is playing at most multiplexes.

We’re looking forward to seeing if The Disaster Artist can fulfill the plenty that its promising.

James Franco Directing and Starring in Movie “The Disaster Artist” Following the Making of “The Room” To Be Adapted by Scott Neustadter and Michael H. Weber

by Greg Sestero and Tom Bissell tells the story of how Tommy Wiseau rose to fame, though probably not in the way that he thought he would, by making the infamous movie known as The Room.

James Franco is now adapting that book into a full length feature where he will play Wiseau and is having powerhouse screenwriting duo Scott Neustadter and Michael H. Weber write the adaptation. Franco does want Wiseau involved, but only in a finite capacity.

The trailer for this will undoubtedly go viral.