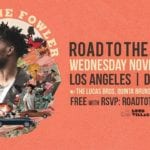 Just so you know, rare are the chances to see someone like Jermaine Fowler do an extended set for free these days like he will be doing this Wednesday at Genghis Cohen.

Tickets are FREE w/RSVP. Get in on this here.

It’s good to see that CBS wants to kick-off its sitcom from Jermaine Fowler (also a sitcom that’s noticeably different than the other new CBS sitcoms The Great Indoors, Kevin Can Wait, and Man with a Plan) by potentially having the most eyes on it when it first airs (The Big Bang Theory still draws huge ratings).

This special preview will happen on Thursday, February 2nd at 8:30PM, then have the series follow 2 Broke Girls with a slot on Mondays at 9PM.

As it had to go through being a pilot twice, we were worried for a second that Jermaine Fowler’s sitcom wasn’t going to see the light of a TV screen.

That’s right, Superior Donuts, starring Fowler and Judd Hirsch will go to series midseason for 13 episodes. Knowing how much truth finds itself in Jermaine’s comedy, we hope that this will be another multicam that just break the mold of all the multicams of yesteryear, especially given how much the rest of CBS’ new comedies represent those types of sitcoms.

We can’t wait to see what this becomes when it premieres.

Jermaine Fowler and Rell Battle together is a very nice pairing that we hope CBS takes advantage of.

Sounds a lot like what happened with Jerrod Carmichael with eventually getting The Carmichael Show on the air.

Well before Jerrod got his 3rd season renewal earlier this month, he went through several rounds of pilots and pilot presentations of his show over a few years before NBC brass decided to give The Carmichael Show a green light.

In a similar way, the only potentially new diverse multi-cam sitcom at CBS, Superior Donuts, is getting reworked as CBS execs really dig Jermaine Fowler.

Based off the initial heat they’ve been taking from their very white, very anti-millennial, new fall comedy line-up of Kevin Can Wait, The Great Indoors, and Man With a Plan, CBS probably shouldn’t wait around in going forward with Fowler and Superior Donuts.

Jermaine is also going to be co-executive producer.

CBS is making good on their development deal with Jermaine Fowler and ordering a multi-cam sitcom pilot where he starts working at a donut shop in a neighborhood being gentrified.

We’re going to keep our fingers crossed as long as we can that this goes to series just so we can see Fowler on TV on a regular basis.