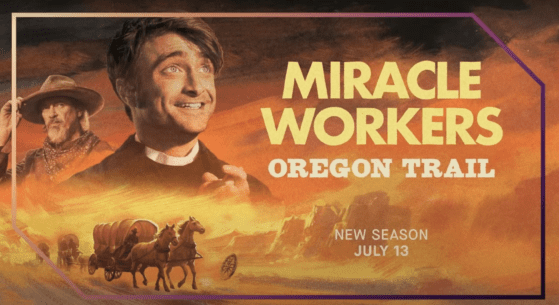 Miracle Workers might prove itself to be one of the most ambitiously conceptualized series on TV. Of course, that is Simon Rich’s forte and it can be great when Rich gets quite a bit of latitude to take his shows wherever he so chooses.

They started at wondering at what was up with an almighty God and then they went to the Dark Ages and now they’re all the way in the untamed West of 19th century America. Even anthology series generally don’t take such wild pivots, but it is what keeps intriguing us about Miracle Workers as the show continues on TBS.

From the looks of it, this might be one of the best seasons yet in how it gleefully pokes at all the tropes and history of the Wild West including Radcliffe, perhaps, playing some version of Mormonism founder Joseph Smith.

Get a look at this literally trail blazing season of Miracle Workers here, then look for the premiere on Tues. July 13th on TBS.

Kumail Nanjiani To Star In Feature Adaptation of Simon Rich’s ‘Any Person, Living Or Dead’

Kumail Nanjiani To Star In Feature Adaptation of Simon Rich’s ‘Any Person, Living Or Dead’

Already, we love the combo of Kumail Nanjiani getting top billing, the writing of Simon Rich (Miracle Workers, Man Seeking Woman), and the directing of Jonathan Krisel (Baskets, Portlandia) here. Couple that with a story that seems to have ingredients of Bill & Ted’s Excellent Adventure, Looper, and Back to the Future and we are incredibly intrigued.

Basically, we can’t wait to see Kumail potentially hunt down Shakespeare, which very likely might happen based on the premise of Any Person, Living or Dead.

If you loved the whimsy of Simon Rich’s series-that-should-have-had-a-longer-run Man Seeking Woman, a comedy that stars Kristen Schaal at ABC that is, “told from a child’s perspective is about working together, overcoming adversity and getting the monsters in your closet not to eat you,” ought to serve up as much as whimsy as you can handle.

That being said, this project has no title and is only at the put pilot stage, but it certainly is one of the more intriguing things on ABC’s development slate in recent memory.

Also, we hope this gets picked up so Kristen Schaal gets top billing on a TV show.

One of the most imaginative shows on television unfortunately will come to a close after the conclusion of its current season.

If you haven’t gotten into Simon Rich’s Man Seeking Woman, you can stream it on Hulu. We highly recommend to do so.