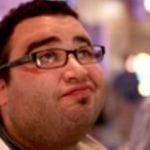 1) It’s official: The Nerdist Theatre has arrived (@nerdmelt) and the back room of Meltdown Comics is no more (well, sort of).  Kicking off their inaugural weekend off with Jimmy Dore’s Pop and Politics tonight and a live Nerdist Podcast w/James Gunn tomorrow night, the Nerdist Theatre is sure to be one of the “places to be” in LA.

2) LA via Texas and Texas via LA: Hampton Yount’s experiences at SXSW and Matt Ingebretson and the Hell Yes Fest in the Austinist.

3) The Comic’s Comic is now on Tumblr.  I think you should follow.

4) Comedy Central now has a smart phone app for free.  Perhaps you can find out when Mash-Up is on at 3:30AM again even more accesibly than visiting the Comedy Bureau.

8) May I stress that I have ABSOLUTELY no problem with people telling jokes that might be considered controversial or “too soon” as long as they’re inherently funny and not depending on mere hyperbole/graphic detail.  Perfect example from comedian Brooks Wheelan posted only a few days after the earthquake and tsunami struck Japan: @brookswheelan This whole Japan thing is the biggest win dolphins have had since the ‘72 undefeated season. #LARRYCSONKA.  Nicely done, Brooks.  Nicely done.