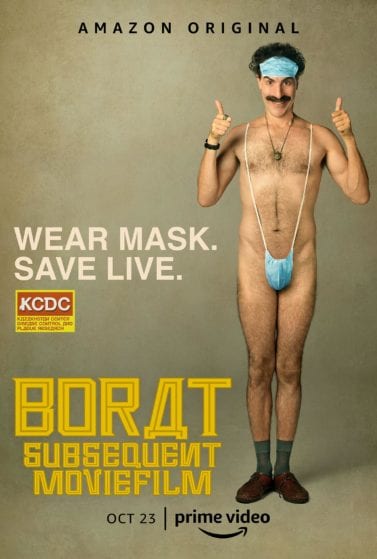 Of course, the movie that was officially entitled Borat: Cultural Learnings of America for Make Benefit Glorious Nation of Kazakhstan would not simply have a title of Borat 2.

The follow-up to the original Borat will be indeed called Borat: Subsequent Moviefilm and it’s set for an Oct. 23rd release on Amazon Prime, just over a week and half away from the election. The trailer just dropped this morning and it would seem that there might really be some political implications with this sequel given Borat’s crashing a Mike Pence event.

As whispered about in announcements of Borat: Subsequent Moviefilm, Sacha Baron Cohen dons his famous Borat character, and then goes into other characters in different costumes as Borat (in order to not be recognized). Even though it still kind of sounds like Borat, Cohen amazes with what he’s still able to get away with.

See for yourself in the very first trailer for Borat: Subsequent Moviefilm here.

So, is “The John Oliver Effect” still not a real thing?

In this segment, you might have learned that Pence has a pet rabbit named Marlon Bundo and has subsequently written a children’s book focused on his rabbit. Oliver and his Last Week Tonight team saw this happening and made their own pro-LGBTQ children’s book also about Marlon Bundo and had it published and distributed online with all proceeds going to the Trevor Project and Aids United.

The book’s first print run sold out and became an Amazon bestseller in less than a day, prompting for a 2nd print.

You can get more details and get your own copy of A Day in the Life of Marlon Bundo here.

If you can’t wait that long, you can get an e-book or audiobook version (featuring the voices of Jim Parsons, Jesse Tyler Ferguson, Jeff Garlin, Ellie Kemper, John Lithgow, Jack McBrayer, and RuPaul).

While “The John Oliver Effect” may still be up for debate, at the very least this is a great example that comedy can actually make a direct difference in the world for the better.

Last night, that desired additional screen time came in the form of an interview with Stephen Colbert and a fun bit where Paul plays the guy who heads up the one newspaper in the entire country that endorses Trump.

We can only hope that the press tour for Bajillion Dollar Propertie$ leads to more of this.