The trailer for Los Espookys already had us very excited for what could be one of HBO’s most intriguing new, high-concept comedies in awhile. Still, there is still plenty of mystery as to the characters, stories, etc. that Fred Armisen, Ana Fabrega, and Julio Torres have cooking.

Conveniently, this behind-the-scenes inside look into the world of Los Espookys just got posted and, we have to say, we’re even more enticed for what’s to come. 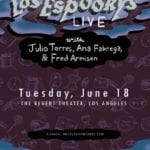 Already, the trailer for Los Espookys has us hooked for the possibilities of what weird horror comedy that creators Julio Torres, Ana Fabrega, and Fred Armisen all have up their sleeves.

The premiere will be on Jun. 14th, but you’ll get a chance to see Los Espookys up close and personal at The Regent downtown just a few days after. Go get your tickets now for $30 (they kick up to $37.50 day of).

If you follow the comedy of Los Espookys creators Fred Armisen, Julio Torres, and Ana Fabrega, you’ll know that you’re in for something delightfully off-kilter with whatever they’re doing.

They’re bilingual comedy horror series Los Espookys is no different as it follows a latinx group that gets hired to give folks terrifying experiences (some of which might be a little too real?). This trailer really whet our appetite for this is so vastly different from anything else on TV right now. See for yourself here.

If you’re digging Los Espookys like us, make note of the premiere date, Fri. June 14th at HBO.

Well, this is a much welcome surprise to find its way to HBO.

In case you didn’t know, Julio Torres and Ana Fabrega have been been off-beat English language comedy gems for quite some time and we can only imagine what will come with a Spanish language comedy that they’re writing with Armisen. They’ll also been co-starring in Los Espookys with Fred as well as Bernardo Velasco and Cassandra Ciangherotti.

From the sounds of it, Los Espookys sounds kind of like Atlanta on FX, but done in Mexico City and focuses in on trying to make it in the horror genre rather than rap. That’s pretty much all we need to hear to wait with bated breath for the first teaser/trailer.