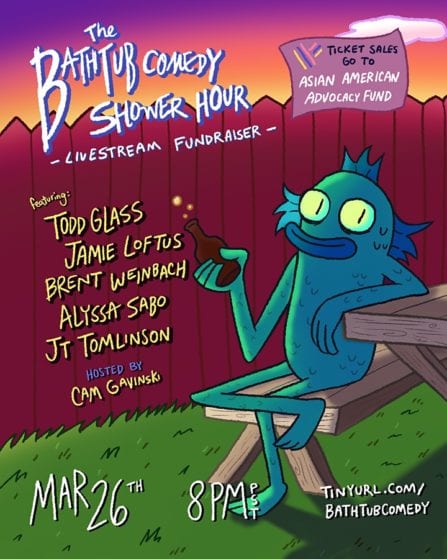 As you hopefully know, the AAPI community in America is dire need of having their voices heard and stopping discrimination and violence against them. Thus, we’re shouting out The Bathtub Comedy Shower Hour, the delightful monthly comedy live-stream on Zoom, as they are raising money for the Asian American Advocacy Fund, an org dedicated to AAPI in Georgia.

For this very special show, they have an absolutely terrific line-up that includes:

This particular edition of The Bathtub Comedy Shower Hour is set to stream this week on Fri. Mar. 26th at 8PM PT/11PM ET. You can get tickets through donations to the Asian American Advocacy Fund (Donations collected through Venmo: @Cameron-Gavinski, $8 minimum donation for ticket).