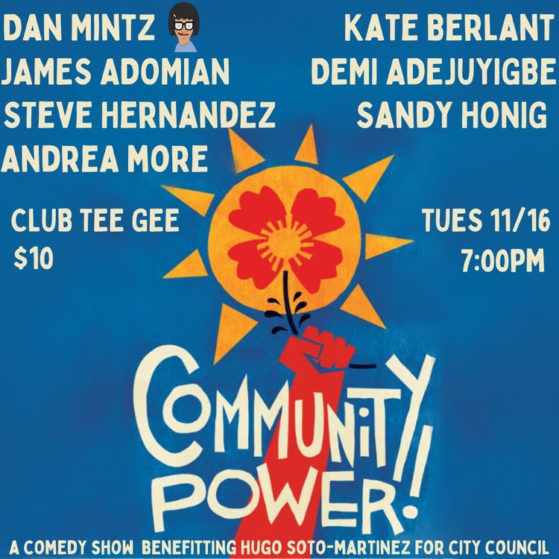 Many of the very best line-ups for comedy shows often come with the purpose of raising money for a worthy cause. That was definitely true all of last summer as gala level line-ups assembled on Zoom to raise money for mutual aid, undocumented relief, and local representative campaigns.

That will be true yet again as Hugo Soto-Martinez is raising money for a run at LA City Council (quick reminder that two LA City Council members were indicted on federal charges in the last year or so and we need good folks in those seats) as someone who is a more fair, equitable, and safe life for Angelenos. Thus, he has been doing pop-up comedy fundraisers as of late.

This latest edition of Community Power will feature the stellar comedy stylings of:

That’s beyond a stacked show on Tues. Nov. 16th at 7PM PT at Club Tee Gee and one that you pretty much shouldn’t miss for any reason. Tickets start at $10 and sales all go towards Hugo Soto-Martinez for City Council 2022!

Go get them here before they sell out (Tee Gee is a beautiful and very intimate venue, so space is limited, FYI).