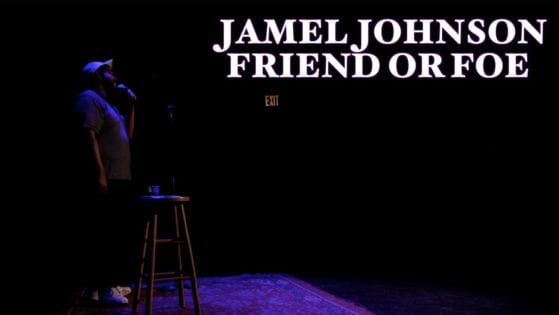 In addition to being one of the comedians that you should be watching as they make their ascension, Jamel Johnson is so self-realized in his comedic persona that we could truly hear him rant about anything for quite awhile.

That notion really got put to the test with Jamel’s brand new special Friend or Foe that, because of that damn pandemic we’re all living through, was made completely without an audience. Johnson did shoot this 1/2 hour special with a two-man crew and proper social distancing of course at one of LA’s most beloved indie venues, The Lyric Hyperion.

It will never not be strange to hear stand-up without a live audience laughing, but, for our money, Jamel’s passionate rants about the socio-political minutia of life are just so damn funny that they transcend a completely empty room.

Interestingly enough, Jamel’s special actually stands out from any other sort of special that was done with little to no audience. Drew Michael’s HBO special was set up to seem like he’s in his own head as he’s telling his own jokes along with some staged scripted scenes and Harland Williams’ Force of Nature was shot in the middle of a desert. Both were conceptual adventures in to what might happen at outer limits of stand-up comedy.

Johnson’s Friend or Foe, on the other hand, is a half-hour special that was made out of what the circumstances have afforded him. There isn’t really any tailoring of any of his material to the times or for the strange conditions in which the special was produced. Jamel is just standing alone delivering the his material out a sheer, undeniable need to. While defying the art form of comedy in so many ways, an unfazed Johnson rolling through his material with no audience (with the same sort of vigor he would normally have in the before times) somehow speaks to the tireless drive of being a stand-up comedian. The image of Jamel yelling about the small stuff in an empty room is, in of itself, a pretty great over-arching joke that, for us, had us busting up laughing the whole way through.

Jamel Johnson: Friend or Foe is out now on Vimeo for $5. Go get and enjoy it here already.