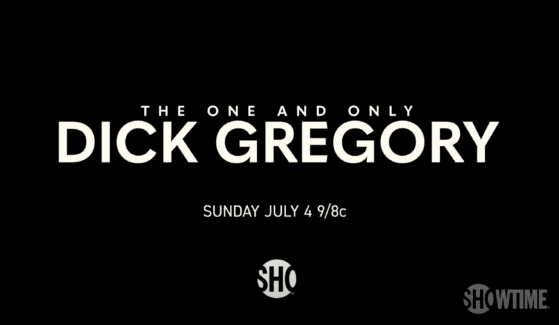 In regards to comedy both being a bridge between worlds and speaking truth to power, the name Dick Gregory better be at the top of the list. Gregory was a comedy pioneer unlike any other, especially for all the barriers he broke down and how much irony and absurdity he pointed out in race relations and in the actions of the U.S. government. Also, you ought to know that’s just scratching the surface of what he did throughout his comedy career and his lifetime.

Thus, Showtime is giving Gregory his due with a docu-special The One and Only Dick Gregory and having it premiere on, of all days, the Fourth of July, which is fitting for how much truth he freely spoke in his comedy.

Get a taste of what’s to come with The One and Only Dick Gregory here, then look for it to premiere on Sun., July 4th at 9PM on Showtime.

Often, it’s debated whether comedy itself can actually make a difference in society. How effective a satirical joke mocking various societal establishments is nearly impossible to measure, but one Dick Gregory always made sure that he put action behind the truth that he spoke to power.

Fighting for Civil Rights in the 60s, protesting against the Vietnam War, standing for the passage of the Equal Rights Amendment, and going on hunger strikes for several different other causes are the sorts of things that Dick Gregory did in addition to being lauded as the first black comedian to successfully cross over to play for white audiences in the 60s.

Gregory’s activism and jokes always seem to go hand in hand and that proved true throughout his entire career, which stretched to his final days (Dick was still actively performing at venues throughout 2017).

So, go down a YouTube rabbit hole, read his books, read books about him, listen to his albums of which there are several, take note that he was on Wondershowzen of all shows, and do anything else to pay your respects to one of the true comedy legends and the sort of person that might have actually given you hope about America. 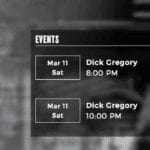 The legendary Dick Gregory is playing the Hollywood Improv this Saturday. That should be all you need to know.

Tickets are $30 with a two item minimum. Get them here.

And Here’s That Obama Episode of WTF with Marc Maron

Last Friday, President Barack Obama indeed came to Marc Maron’s garage, albeit a super safe version of Marc’s garage that was covered in pop up tents and a Secret Service detail to do an episode of WTF.

They chatted for just over around an hour in a conversation that, because it is podcasting and of the noted way that Maron conducts interviews, is more intimate and free flowing probably any interview that Obama has had. Thus, you get to go from talking about the tragedy in Charleston last week all the way to talking about Pryor and Dick Gregory.

Listen to this milestone for both podcasting and WTF with Marc Maron here.

Dick Gregory Getting a Star on The Hollywood Walk of Fame

Exclusive: Comedian Dick Gregory to be honored with star on the Walk of Fame on Feb. 2. Via @WOFstargirl

If you’re perchance walking along Hollywood Blvd. gazing along the various names on The Hollywood Walk of Fame, wondering who is exactly who and why are they there, take note of the Walk of Fame’s newest member, comedian Dick Gregory.

In a time of racial tension and freedom of expression being questioned, Gregory, his comedy that bridged black and white audiences in the 60s, his activism in The Civil Rights Movement, and more deserve a moment of your time.

The ceremony with the star will take place on Feb. 2nd.