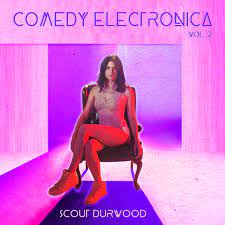 Please Get and Enjoy the Dark-Comedy-Fueled Pop of Scout Durwood’s Comedy Electronica Vol. 2

Blending dark, existential or vulnerable, honset comedy with any sort of music is no easy feat. When it comes to doing it with pop music or even electronica, the delicate balance becomes even more precarious and one really risks it being too over the top or forced.

Scout Durwood manages to pinpoint a balance that speaks to the absurdity of the universe especially as it relates to an individual life counterbalancing upbeat, uptempo pop songs. Comedy Electronica Vol. 2 showcases Durwood’s musical comedy prowess in spades. The release of two volumes (as opposed to just Comedy Electronica) was due to the pandemic, but, honestly, both are worth a listen and feature the sort of anthems that really nail the disillusionment of our times (in a catchy, very cheeky way with a lesbian lens).

See for yourself with this on-point Sims parody of a music video for Scout It Out.