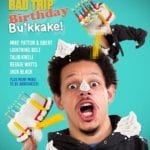 For years now, Eric Andre’s birthday party has been the sort of a legend that you’d hear whispers about and see glimpses of on Instagram.

Now, Andre is upping the ante, potentially throwing his biggest birthday shindig ever, complete with the insanity that comedy’s premier enfant terrible is beloved for as well as a pretty damn great line-up of comedy/music at the Hollywood Palladium (Kweli, Reggie Watts, and Jack Black on the same line-up? Come on now.)

Tickets for Eric Andre’s Bad Trip Birthday Bu’kkake are on sale now, going for $59.50-$160, and don’t be surprised if they sell out real quick (i.e. go get them now)

We really don’t know why you would need more explanation that comedian Moses Storm attempted to throw his own birthday party at a Chili’s located at The Los Angeles International Airport in order to watch the hysterical video of him doing so.

However, you should note that he really did buy a non-refundable boarding pass for both himself and his camera man.

Now, watch and enjoy over and over again. 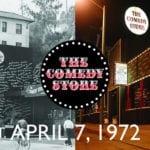 In honor of our 39th Birthday, we are giving #FREE admission to our Original Room show and Comedy Store Yearbooks to all.