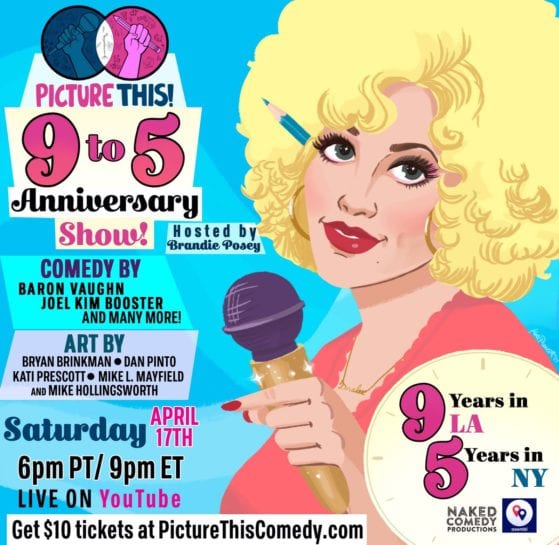 One of the best shows that we went to in or out of the pandemic was the live animation/live comedy hybrid experience lovingly known as Picture This! For the uninitiated (or those who have spent so much time in quarantine that they’ve forgotten the before times), some of the best animators around would live-animate based on stand-up comedy that was being performed and their animations would be projected on a screen behind the comedian. The results were, with no irony at all, magical (and, of course, hysterical).

There have been a number of virtual versions of the show throughout lockdown, but Picture This! has been on a bit of a break. That all ends next month when they simultaneously celebrate a 9 year anniversary in LA and a 5 five year anniversary in NYC.

To mark the occasion, they have a stellar line-up of comedians and artists, which include: 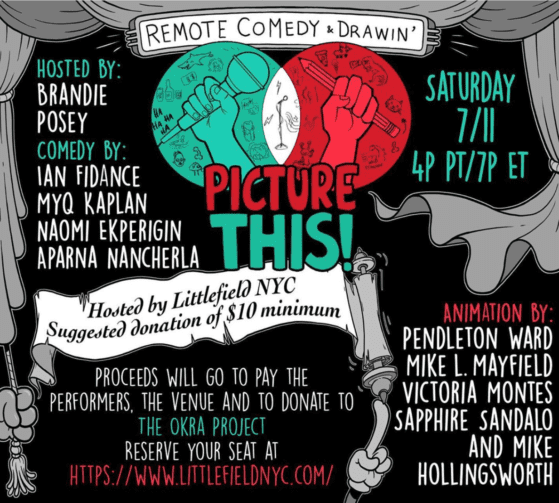 Picture This has taken more than a little bit of break since their last live-stream show, but the best in animation and stand-up teaming up to create a wild, hilarious blend of the two is back next weekend. It’ll be another round of the freshest animation from some of the best comedians sourced from anywhere from the likes of:

This edition of Picture This is set for Saturday, July 11th at 4PM PT/7PM ET. Get your tickets for $10 here (proceeds go to supporting performers, venue Littlefield NYC, and The Okra Project.

Sure, the voices of Jason Schwartzman, Lena Dunham, Reggie Watts, Maya Rudolph, Susan Sarandon, Alex Karpovsky and John Cameron Mitchell might entice you to watch any animated comedy that has them as the cast.

However, Dash Shaw’s unique animation (he’s a graphic novelist by the way) for My Entire High School Sinking Into the Sea as well as the title should peak your interest more.

My Entire High School Sinking Into the Sea will hit theaters on April 14th.

Ed Helms continues making moves as a producer racking up projects including this latest one with NBC that’s an animated comedy working with Graham Wagner who has worked with in the past on a little thing called The Office.

Over the last several months, it’s clear NBC has definitely doesn’t want to stop doing business with people from The Office.