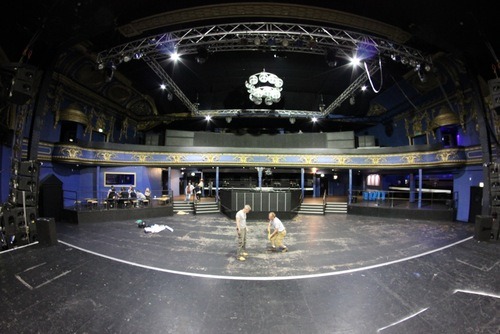 Across the pond, Sky Atlantic HD is bringing 14 episodes of the revolutionary improvised stand-up show, Set List, that started here in Los Angeles. The picture above is their set being built at the Electric Brixton in London.

In short, this will be amazing and will air in the States at some point soon. Not only is the show itself amazing, but they’re line-ups will be just as awe worthy with both Yanks and Brits in Robin Williams, Drew Carey, Ross Noble, Russell Kane, Greg Proops, Frank Skinner, Rich Hall, Dana Gould, Reggie Watts, Todd Barry, Eddie Pepitone, Judah Friedlander, Rick Overton, and more.

Creators Troy Conrad and Paul Provenza have wrought one of the most unique comedy “arenas” in existence by having performers improvise stand-up material on the spot based off of never before seen, bizarre topics such as “genocide note”, “castration addiction”, “snow white supremacist”, and more. The television version will feature 3 comics going through their “set list” magically coming up with material right then and there along with clips from behind the scenes and in the green room without, as we’re happy to report, a language restriction.

Set List has played all over the world a numerous festivals and regularly throughout some of LA’s best comedy venues (UCB, Nerdist Theater). If you no idea what we’re talking about then watch this sizzle reel, then follow them on Twitter and/or Tumblr and see the purest version of how comedians’ brains work. They’ll be doing episodes in San Francisco next month and in LA as well.

By the way, we should probably mention this is one of our favorite shows to see.