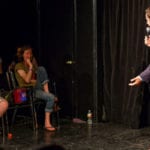 Each performer at the marathon was given exactly 20 minutes to perform, Paul F. Tompkins spent 15 minutes of his dealing with a single drunken heckler who encapsulated the attention whoriness of a whole bachlorette party.

The girl in the white shirt kept insisting that she went bowling with Prince and in telling her story, threw in gratuitous details about her vintage shoes, which was met with pitchfork angry boos.. from just from the ladies in the audience.

When asked if she could change anything about her interaction with him, she would insist that he buy her some “motherfucking pumpkin fries”.

Since she had just walked in before PFT’s set and promptly left out the back door after it, she paid $20 to be embarrassed by a comedian.

When things like this (Paul F. Tompkins being heckled) happen, I immediately ask, why?  It usually doesn’t matter because Tompkins is hilarious no matter what’s happening.