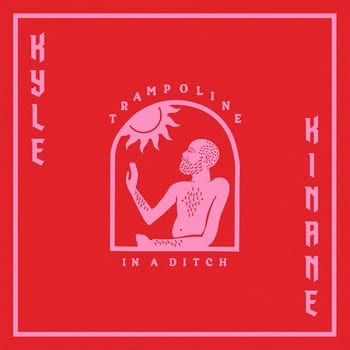 Kyle Kinane‘s first comedy album, Death of the Party, came out over 10 years ago and gloriously announced the arrival of Kinane and his grand, painterly style of stand-up that blended observations and stories with both a poetic, salt-of-the-earth grace and a keen eye for the deeply embedded absurdities of life. Every hour since has seen Kinane refine said style while successfully managing to adjust his perspective with his rising success.

This latest album from Kyle, Trampoline in a Ditch, shows that, 11 years later, he is still very much a masterful artisan when it comes to writing and detailing his bits and stories into these ornate, yet unmistakably homespun jokes. Tying the paranormal to white privilege or his subconscious finding a way to subvert the beauty of water fall or even a layered tale of having a DUI are just a small sampling of what is his most sprawling album (probably one of the most sprawling comedy albums in comedy history). In fact, Trampoline in a Ditch runs just over an hour and 40 minutes because, in addition to an hour of stand-up, there are separate stories that haven’t found a home in previous releases from Kyle. Of course, Kinane is one of the best storytellers in comedy and these bonus tracks really make you get your money’s worth for this album.

In addition to all of that, Kinane wanted to bring a new element into the fold for what is effectively a double album. Different bits from Trampoline in a Ditch will be animated in different styles rather than just. seeing more of the Kyle you know and love on stage with a mic and a mic stand. The very first animated bit from CJ Cook is pretty spectacular and follows the opening of the album. Please enjoy it here.

Kyle Kinane: Trampoline in a Ditch comes out Friday, July 24th from 800 Pound Gorilla Records. Please do yourself a favor and pre-save or pre-order it right now.