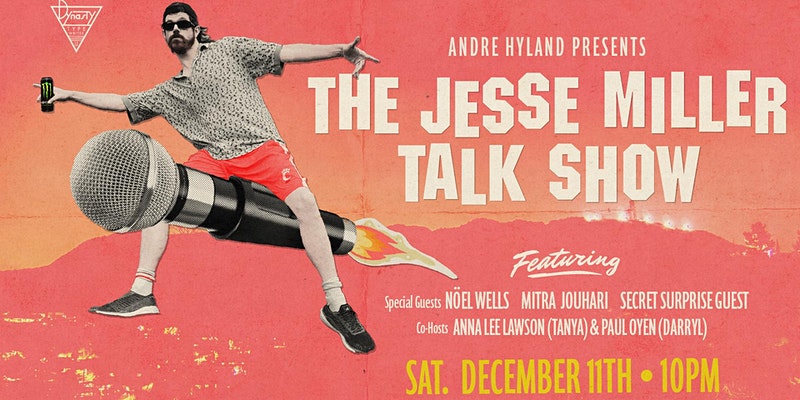 To this very day, Andre Hyland‘s creation, The Jesse Miller Talk Show, remains as one of the craziest and best talk shows we’ve ever seen (that includes any of the ones on TV all the way to ones that happen in someone’s apartment).

For the unfamiliar, The Jesse Miller Talk Show puts one Jesse Miller at the monster truck driver’s seat of his very own talk show that blends the outrageous energy of self-proclaimed media mogul that you might find outside of many 7-11s in LA that celebrities may have frequented with a seemingly unlimited capacity for pop culture knowledge and wordplay. Also, there’s heavy guitar shredding from Darryl (Paul Oyen) and plenty of PDA with his sidekick/boo Tanya (Anna Lee Lawson).

In short, it’s a good time and we’re glad to see that it’ll be going back up, in-person, on this side of the pandemic at Dynasty Typewriter on Sat. Dec. 11th at 10PM PT. So far, Jesse will be putting his dazzling interview tricks on display for Noël Wells, Mitra Jouhari, and a special surprise guest.

Tickets are $15 right now, so you best go snatch them up right now.