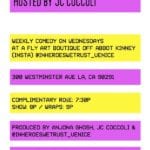 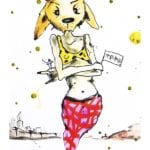 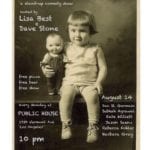 For several years, JC Coccoli has been dutifully holding down her 10PM Monday stand-up show at 1739 Public House. It’s actually one of the longest running bar comedy shows in LA at this point.

She’s now franchising her show across LA county all the way to Venice starting next Wednesday at the art boutique known as In Heroes We Trust. The first line-up for the Venice Fringe will be stacked with Brooke Van Poppelen, Byron Bowers, James Davis, and, of course, JC.

The Monday Fringe show at 1739 Public House will still happen as it always has every Monday at 10PM, but will now be hosted by the awesome duo of Dave Stone and Lisa Best with a line-up, as seen in flyer with the baby, that’s also pretty stellar.

Now, for a bit of a local LA comedy history lesson that is part of the reason why JC is branching out the show throughout LA.

From there, JC kept the show going at 1739 Public House, then called Keep It Clean, that always had great comics, but had to dealt with some rowdy bar patrons not expecting a show every now and again. It was actually one of the first shows in LA that we regularly attended even before we got The Comedy Bureau off the ground.

One evening in 2011, we saw an audience member going from high fiving a comedian during a set to dry humping him to getting kicked out. Immediately after, the same comedian, Sean Green, had to deal with another drunk heckler to which he challenged to a fight. After that, two other great comedians that just happened to be hanging there, Davey Johnson and Kyle Kinane, inspired by the events that just transpired, played “brothers” of the hecklers that were ejected and it was one of the best, most insane nights of comedy we’ve ever been to.

In fact, we wrote about it in full here.

After a few years, 1739 Public House got shifted to the space next door, previously occupied by Cuba Libre, making for a very spacious bar that housed several TVs, pool tables, patio, dozens of booths, and a nice little alcove-ish space for JC’s show, which got a re-brand with it’s current name, Fringe. As there is plenty of space for bar patrons to not be part of the show, watch sports highlights, enjoy a couple rounds of pool, or maybe even have a very private conversation upstairs, the show could breathe a little better and not have to worry as much about disturbing the ecosystem of this public house.

Still, there would be the occasional crazy thing that would go down just because it’s 10PM on a Monday we suppose. Such a crazy thing happened last week that is another crazy milestone in the show’s history.

Last night – witnesses can verify ( Jake Kroeger Lisa Best Laura House and Adam Newman ) at Fringe on Mondays a couple was talking loudly and a very sweet, but def tipsy/ drunk, and very tall model-like white woman about my age attempted to regulate them. I was on stage and all I heard was “You two are so rude. Out. You get out.” She stood up to let them out of their seats and though they were confused they were listening to her. Like, she jedi mind tricked them and the white model woman stood up and the man stood up willingly accepting his fate of being asked to leave and his girlfriend followed… I am at the mic, just watching. Waiting. But then this is where things got sticky, the girls were in each other’s faces, one holding a beer, and the “citizen’s arrest” white woman who I understand was doing what she believed was right, kept repeating “no, you leave. You are so rude. This is a show. She is talking.” (referring to me! ) And, I’m just on stage, watching it happen because they are adults, and I think in this political climate people want to emote. Who am I to stop them? Then all of a sudden, “citizen’s arrest white model woman” went to shove them calmly, but still, both out. NEVER put your hands on another drunk woman (comedy 101). “Don’t fucking touch me.” (the infamous words of warfare) and then boom, a beer goes flying onto “citizen’s arrest white woman” and one side of our audience. I was impressed no one got splashed because they all moved so quickly. It was skill. The couple exits-
the man apologizing – the woman cursing bloody murder. And the room is in shock. Stunned. Quiet. Tipsy “citizen’s arrest drunk woman, with her shirt drenched sits back down and says "No violence. No. They were loud and they were rude.” And that was that. Another undeniably punk rock moment in comedy.

We indeed were there and that did all happen. In fact, JC was talking to us about branching out the show right before this edition of Fringe kicked off, making this “audience member showdown” serendipitous.

So, 1739 N. Vermont will continue to be one of the reliable last stops in comedy on Monday here in LA, but it will now also have companion shows that you should also go to in this gigantic city of ours.