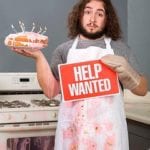 Sandy moved to LA after studying at Indiana University while taking summer classes at the famed Second City in Detroit, then immediately starts working at National Lampoon on the Sunset Strip. He’s hired to write, direct, produce and perform for comedy shorts that would go up on their website and on college television networks. He goes on to appear on Mad TV and Comedy Central’s Mash-up, as well as co-hosts the web-series Fat Guy Nation. He eventually goes on tour with 90’s icon Pauly Shore and builds a name for himself that he carries back to LA on his back and throws down at the steps of his apartment, where he gets back to work, writing jokes. Whether or not any success, paid gigs or applause fulfill him, and what he came to California to do, isn’t even relevant at this point. His presence on stage as a performer and friend is relevant in itself. Anything else is bonus and whether or not you laugh, isn’t. He’ll be fine because, after all, he’s just dreaming.
Find Sandy on Twitter