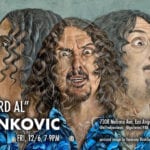 Gallery 1988 is at it again with another wondrous art tribute to iconic figure in comedy. This Friday, they’ll be unveiling an entire exhibition of Weird Al Yankovic inspired art from dozens of artists.

By the way, the song parody master Weird Al Yankovic will be there hosting the whole opening night.

Admission is free, but we have no doubt that it’ll get packed pretty quickly, so arrive early at Gallery 1988 for “Weird Al” Yankovic’s Art Tribute  if you can.

Weird Al Yankovic to be honored with star on the Walk of Fame on Aug. 27 | via @wofstargirl”

Weird Al Yankovic to be honored with star on the Walk of Fame on Aug. 27 | via @wofstargirl”

This is probably an appropriate icing on the cake for Weird Al Yankovic, who is probably the most successful song parodist of all time, probably by several miles.

To our knowledge, there hasn’t been another record of parody songs by someone who isn’t Weird AL that went to #1 overall on the album charts, kicking off a massive, massive international tour. That’ll probably be the case for several years to come.

Also, It probably won’t happen, but it’d be great if Weird Al’s star took over a certain current POTUS’ star on the Walk of Fame.

If you know anything about Austin’s Moontower Comedy Festival, it’s that they have plethoras of wondrous comedians.

Announcing Tiffany Haddish, Weird Al Yankovic, and Mike Birbiglia first on what is sure to be a massively stacked line-up ought to peak your interest.

If so, take advantage of Warrior and Satellite Badges early bird prices of $199 and $99 respectively.

For comedy nerds/completists/collectors, a massive new collector’s box set featuring the entire Weird Al Yankovic catalog. This will include a brand new album, exclusive to the set, that has unreleased tracks and rarities from Yankovic’s own vault.

Called Medium Rarities, it includes songs from the beginning of Weird Al’s career to present day. Here’s a great promo complete with a Super Mario Bros. style game with Weird Al in it showing what’s on the album.

The Squeeze Box: The Complete Works of “Weird Al” Yankovic costs $475 and is only available in limited quantities. We’re guessing the limited run has something to do with the box set being in the shape of an accordion.

Pre-order it here and get it on November 24th this year.

Tenacious D is bringing their awesome one-day comedy and music festival extravaganza back to The Shine Expo Hall & Grounds with yet another stacked line-up as you can see above.

Tickets will go on sale Friday and we’ll be sure to remind you.

10PM on Showtime and 11PM on IFC respectively.

Showtime’s latest hour long stand-up special will come in the form of Ben Gleib: Neurotic Gangster. You might know Ben as the host of Idiotest on the Game Show Network, but he happens to be a skilled stand-up comedian as well.

After that, season 5 of Comedy Bang! Bang!, the TV series, on IFC will premiere its 5th season, which just happens to also be the first season that that musical parody king Weird Al Yankovic will serve as bandleader next to host Scott Aukerman.

IFC Gives a Full Episode Sneak Peek to the New Season of Comedy Bang! Bang! with Weird Al Yankovic as the Band Leader

Season 5 of Comedy Bang! Bang! on IFC is pretty close. In fact, the season premiere is this Friday, June 3rd, which will be the inaugural episode for new CBB bandleader and legendary comedic musician Weird Al Yankovic.

Fortunately, the good folks at IFC were nice enough to preview a full episode before the season premiere that you can watch on YouTube right now.

Following in the footsteps of Reggie Watts and Kid Cudi, Weird Al Yankovic will be joining the TV series version of Comedy Bang! Bang!, even though his footsteps in musical comedy precede both of them,

He’ll be alongside host Scott Aukerman in the show’s absurdist take on a late night talk show and is such a perfect fit for the show. Honestly, we can’t think of who would be a more fitting bandleader for Comedy Bang! Bang!

It’s no secret that many folks have been trying to figure out how comedy and sports can mesh. HBO has done their faux sports documentaries including Ferrell Takes the Field and 7 Days in Hell for example.

Now, Above Average has enlisted Saturday Night Live co-head writer Bryan Tucker to spearhead The Kicker, their new offshoot that finds the intersection between comedy and sports in various types of web videos.

Here’s a bit of a preview of how they’re marrying the worlds of Weird Al Yankovic and Jamaal Charles.

The Kicker officially launched today and they’ve got plenty of videos for you to see if this new channel has room on your daily queue.

Disney XD is sure stacking its cast here for adults.

Over a year ago, Disney XD announced a new series amidst a slough of exciting slate of animated series actually designed for all ages including Craig McCracken’s Wander Over Yonder that will star Jack McBrayer.

Wander Over Yonder, now in its second season, has some more excitement built up around it as their guest stars will include the likes of Jon Hamm, Weird Al Yankovic, June Squibb, Andy Daly, Rob Riggle, and Ken Marino.

Along with other shows like Future-Worm!, Phineas and Ferb, the network has built a pretty solid animated line-up that can hold up with adults.

The likes of Weird Al Yankovic, Tenacious D, Rachel Bloom, Trevor Moore, and more have brought the art of musical comedy to a point where they warrant an entire TV special honoring their works over the years.

So, College Humor and IFC are doing just that with the very first CollegeHumor’s Comedy Music Hall of Fame. The great Paul F. Tompkins will be presiding as the host and there will be retrospectives, interviews, and new videos to be seen.

Here’s an announcement as proof of all of the above.

Weird Al Yankovic Does an Unboxing Video For His Grammy Award

Unless it’s a lamp shaped like a leg, it’s not too often you get to see the unboxing of a major award.

In case you don’t know, most people don’t get to take home the statues they are handed at big time awards shows. Those are just for the cameras.

The actual statues that they put on display come much later in the mail and Weird Al Yankovic graciously gives us a look into how “elaborate” it is to get your Grammy in the mail.

One of the longest running comedy publications in existence, MAD Magazine, has invited Weird Al Yankovic to be a guest editor for the next issue.

With his acceptance of the invitation, Yankovic will apparently be the magazine’s first guest editor.

Yankovic will also be joining in other noted comedy folks like Key & Peele with Entertainment Weekly  or Judd Apatow with Vanity Fair recently guest editing the magazine’s comedy issues.

As you can clearly tell, he’s been dreaming of this for awhile:

March is just around the corner, which means The Late Late Show with James Corden is almost set to premiere. In the meantime, the interim period of The Late Late Show is still in effect and, this week, they have very intriguing guests hosts in Thomas Lennon, Lauren Graham and Will Arnett.

Lennon is scheduled for Mon-Wed., Graham on Thurs., and Arnett for Fri.

In addition to their hijinks, Weird Al Yankovic, Natasha Leggero, Nick Kroll, Matthew Perry, Tom Papa, Jimmy Kimmel, John Krasinski, and David Cross are all set to be guests this week too.

Take note that Lennon has voiced Craig Ferguson’s robot skeleton sidekick Geoffrey Peterson at The Late Late Show from time to time and perhaps he’ll do it again.

Find out what happens (two weeks ago, they had the Super Bowl Sharks on) by tuning in to CBS at 12:35AM all week long.

In the gigantic crowd of Grammy nominees, finding the comedy winners might be a little difficult, especially since they’re never all announced during the telecast.

So, we’ve hunted through all them and found 2015 Grammy winners in or somehow connected to comedy.

Honestly, there are no surprises here and we’re glad to see Yankovic cap off his 2014 Billboard #1 album with a Grammy win.

Now you can go enjoy the rest of your evening with Better Call Saul and Last Week Tonight.