That’s How I Lost The Last One follows a flawed, sad man played exquisitely by Jake Weisman and has singular talent for losing girlfriends over and over and over again. It is every bit the antithesis to a romantic comedy, which is why we love it.

This Comedy Central digital series comes from the sinisterly comedic mind of Zane Rubin and will probably be a go to for us when Valentine’s Day rolls around again. 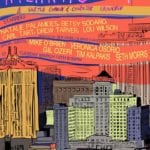 Much of UCB’s best and brightest (really, they’re some of our favorites to rise from the UCB stage) are doing bits, characters, and sketches in this new monthly showcase produced by Nick Ciarelli and Bradford Evans, Atlantic City, starting this week.

The line-up is stacked and we really think you should get your tickets sooner rather than later. They’re $7 and you can (and should) get them here.

Fox has nabbed up a great talent in Veronica Osorio for this upcoming pilot season. She is the Kate from the great quasi-DIY craft web series Kate’s Craft Corner and will now be in an upcoming Fox comedy pilot.

So, keep an eye out, just like we will be doing, for what show or shows Osorio will be cast in.

Veronica Osorio is responsible for one of our favorite how to series as Kate’s Craft Corner makes craft you won’t see anywhere, even on the weirdest, kitchy-est corners of Pinterest.

Learn how to make a beef-o-lantern now here.

Here’s a new episode of Kate’s Craft Corner from Veronica Osorio, the best homemade craft show, especially if you’re interested in making crafts that involve in not asking permission to use your parents’ favorite things that aren’t supposed to be made into anything.

NY based Veronica Osorio has the delightful, dark, but hilarious web series Kate’s Craft Corner wherein she shows people how to make both crafts and keep fueling the fires of your personal inadequacies.

See what we’re talking about with this episode on how to make a salt shaker.