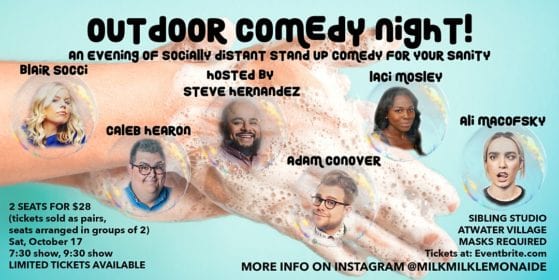 A line-up of Adam Conover, Ali Macofsky, Blair Socci, Caleb Hearon, Laci Mosley, and Steve Hernandez is so solid that they would be worth seeing in almost any setup.

Fortunately, we’re not just hipping you to another show on Zoom. This will be one of those, in times like these, one of those live, in person, outdoor shows that you might have started to hear about.

So, you just might want to catch them, live and in-person (socially distant and, again, outside, of course) this weekend at a just outside of a studio stage. To hammer the point home about being outside, it’s called Outdoor Comedy Night @ Sibling Studio in Atwater Village and they will have an early and a late show, 7:30PM & 9:30PM, for $28 a pop.

You can and should go get your tickets here and here respectively. 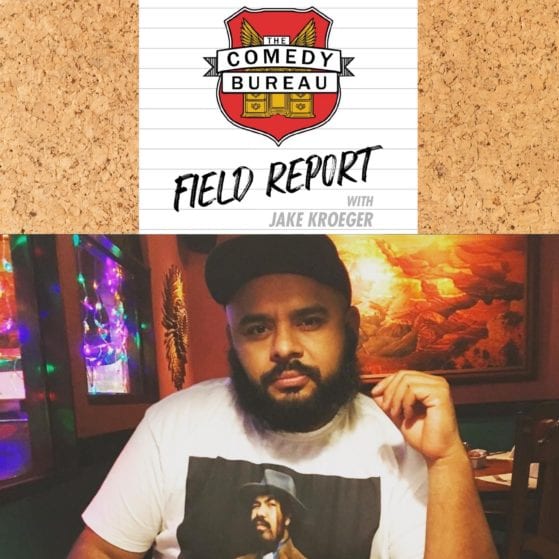 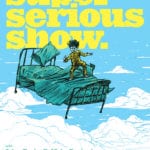 If you’ve been enjoying Kate Berlant and John Early on your televisions throughout 2017, you might want to get in on the first Super Serious Show of 2018 that they will be hosting/headlining (not to mention that the rest of the line-up is pretty stellar too).

Tickets are $7 in advance and $10 (cash only) at door. Please get tickets in advance here. 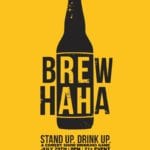 Monthly a house in Silverlake gets turned into a ridiculous “drinking game” comedy show/house party with Brew Haha. Hundreds of folks come out and it seriously looks and feels like you’re in one of those great parties that you’d only see in movies.

Brew Haha will now be trying their hand down in the OC at the Rec Room in Huntington Beach this Saturday, July 29th with a fine line-up of Allen Strickland Williams, Steph Tolev, Morgan Jay, Steve Hernandez, and Brad Silnutzer.

1) Though he has a penchant for provoking, it’s still amazing that Neil Hamburger (@Neil_Hamburger) proves that you can get heckled on Twitter and that, sometimes, the best way to deal with them is to let the heckler put their own foot in their own damn mouth.  After a few tweets along the lines of: “I apologize to @BritneySpears and her fans.  Feeling guilty after meeting her kids in line at local free clinic. #MentalIllness #Malnutrition,” Neil Hamburger’s Twitter feed filled with some, perhaps, ill-conceived “heckles” tweeted at him that he thankfully retweeted and are, now, featured here.

“wow @Neil_Hamburger….i never thought someone could be as ignorant and unsophisticated as you are. karma is a bitch…be ready for it.”

“FEMME FATALE will come for your ass you sad failed comedian. NOBODY knows who you are. LMAO”

“Sorry. mean people like @Neil_Hamburger aren’t amazing. Open ur eyes people. People like him is the reason why there’s so much hate…”

“Using Britney, her mental illness, and her kids for publicity, are we? Hope it makes you sleep better at night, sir.”

“America’s #1 Funnyman? HAHAHA You gotta be kidding. You’re such a nobody, look in the mirror… You fucking failed abortion.”

“You’re such a fail. Trying to become famous making fun of people who will always be more succesfull than you’ll ever be”

“your second name is so unfortunate Lol, get ran over by a bus plz.”

“You can only wish your career is as successful as Britney’s.”

“could you please stop retweeting people who are sarcastically responding to you? it’s really annoying”

2) Josh Rencher’s Frolic is back from yet another hiatus, which I guess would make it Frolic 3.0?  Mar. 2nd. 9PM FREE at Far Bar in Little Tokyo.  What’s Frolic?  Well, I wrote about it right here.  Check back at the Comedy Bureau next week for more details.

3) The birth of a new open mic that could possibly fill in a void that the comedy community has been somewhat feeling on Mondays: Jake’s 38 W. Colorado Blvd., Pasadena, CA. Sign-up (lottery) 7:30PM/Starts 8PM.  First 15 spots are 5 min. paired with 3 min. work-ins throughout the show.  Hosted by the gracious Steve Hernandez.

4) Again, in case you don’t like scrolling down, Tip of the Hat 2/19: Lauri Roggenkamp

7) Recently: Blake Griffin dunked over a car in his victory at the NBA Dunk Contest last night, but can he spin a cheeseburger on an umbrella like Michael Rayner (and also be funny while doing it?)  Didn’t think so.

8) I went though nearly an hour of straight bombing yesterday just to have a good 7 min. set.  In that time, I yelled at myself in my car while stuck in traffic, questioned myself in my intentions as a comedian, and depressed the few people that bothered to listen to me and not the person dancing outside in the rain.  Sometimes, that’s what you need to do to prepare for a show.