May 2, 2019
Uncategorized
bachelor the musical, musical parody, the bachelor 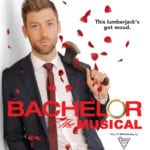 Love it or hate it, The Bachelor will stand as a reality TV institution that has forever affected the landscape of television. Thus, an unauthorized parody musical of it is inevitable and writer Richelle Meiss and director John Flynn do a smash up job delivering such an offering.

Bachelor The Musical nails all the tropes in a fully realized musical and is even delightful to those who actively don’t watch the show and might be slightly unfamiliar with its canon. We got to see it on the intimate stage of UCB Franklin, but it will be lovely to see it on a much bigger stage at Dynasty Typewriter.

Nerdist’s Latest Podcast “Will You Accept This Rose?” Forces Eddie Pepitone to Watch and Discuss The Bachelor with Arden Myrin and Erin Foley

Could this companion possibly could be more compelling than The Bachelor itself?

Beloved firebrand of a comedian, The Bitter Buddha, Eddie Pepitone has joined in on a new show companion podcast Will You Accept This Rose? where Arden Myrin and Erin Foley, Bachelor superfan and historian respectively and also comedians, discuss (you probably guessed it) the latest happenings on The Bachelor.

Take note, Eddie has never been into The Bachelor as he is listed in the show description as “reluctant Bachelor novice” and will be the stark contrast that should make this podcast transcend above just being a companion podcast or even the manufactured reality of this show’s source material.

Get into Will You Accept This Rose? here.