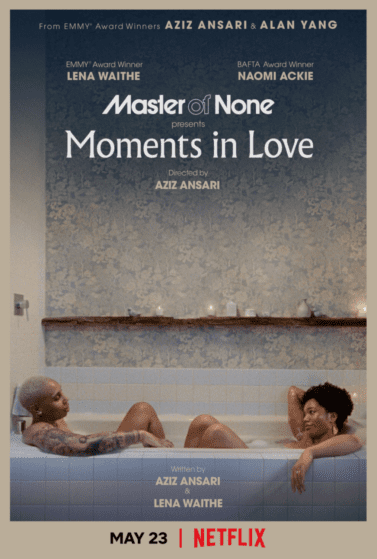 An entire four years will have passed since the arrival of season 2 of Master of None and this impending third. In that time, Aziz Ansari, co-creator and the show’s star (up until now) got embroiled in #MeToo controversy, released a very strategic response and apology in the form of his last stand-up special, and has opted to not be the center of the third season.

This teaser, just released today, just offers a bit of demystification to a recent announcement that new episodes of Master of None were coming soon and they were going to focus on a story co-written and co-starring Lena Waithe, who has played Denise in past seasons of the show. More specifically, this new batch would come under the banner of Master of None presents “Moments in Love”. From the teaser, we see that it follows a relationship, not unlike the very first season, between Lena and Naomi Ackie and all the moments, little and big, that comprise a deeply connected relationship in these times.

This is an undeniably unexpected turn for the show, but it’s also undeniably intriguing. There is a rise in lesbian love stories in the zeitgeist (Portrait of a Lady on Fire, The World to Come, Mythic Quest), but ones that involve two women of color are definitely not as present as their white or partially white counterparts. Aziz and Lena wrote this new Moments in Love portion of Master of None that will fill in said void. The deliciously cinematic showcase of such a rarely-seen-on-TV couple, especially with Lena’s award winning pen, is perhaps the right move for the show now that we’re in even deeper into a global reckoning than we were in 2017.

We shall see what Aziz and Lena hath wrought with all episodes of Master of None presents Moments In Love on May 23rd.