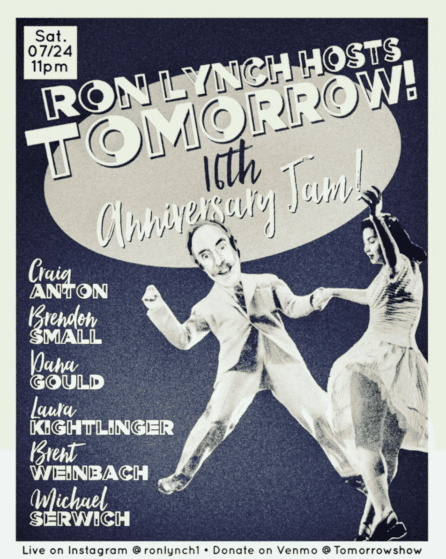 For 16 years, Tomorrow! has been the thing to do on Saturday night at midnight in LA. For so many years, longer than we’ve been doing or covering comedy, Ron Lynch has faithfully brought the perfect mix of absurdity, silliness, beauty, and honesty that’s worth keeping the night going that late.

Of course, for the last year, they haven’t been able to do that in a proper venue and Lynch company have taken to Instagram Live to keep the Tomorrow! flame going and indeed they have kept the show alive and kicking for all these months since whenever March 2020 was (that was a decade ago, right?).

To mark their 16 year anniversary, Ron will be bringing back the original trio, himself, Craig Anton, and Brendon Small, that started off this midnight institution as well as such luminary comedians as Dana Gould, Laura Kightlinger, and Brent Weinbach. Very likely, they’ll have more than just that to celebrate the occasion (in addition to the “Core Four” and Michael Mortilla).

These days, it ought to be something really special if you’re going to tune into an IG Live show, but the 16 Year Anniversary of Tomorrow! with Ron Lynch more than fits that bill. Tune in at Sat. Jul. 24th at 11PM PT/2AM ET on IG Live @ronlynch1 and support the show on Venmo @tomorrowshow.

Best of all, you won’t have to worry about the Delta variant!