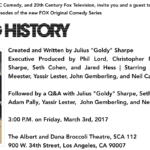 Fox Unveils Trailers for “Son of Zorn”, “Making History”, and “The Mick”

It looks like Phil Lord and Chris Miller are really rubbing off on Fox in the best way possible.

Two of the new comedies that were announced at Fox’s Upfronts presentation have Lord and Miller’s hands involved and those just happen to be two very enticing high concept comedies.

One, Son of Zorn, puts an animated He-Man type, voiced by Jason Sudeikis, into the 9-5 grind in the real world with Johnny Pemberton as a son, Cheryl Hines as an ex-wife, Tim Meadows as the ex-wife’s fiance, and Artemis Pebdani as his boss. Here’s the trailer.

The other involves Adam Pally as someone who has a time machine and has abused it. Thus, he enlists an accomplished history professor played by Yassir Lester to fix something he might have screwed up in the American Revolution. Here’s the trailer for Making History.

To round out the new series, Fox has a show that is basically a Sweet Dee from It’s Always Sunny in Philadelphia standalone series. See for yourself in the trailer for The Mick starring Sweet Dee herself, Kaitlin Olson.

All in all, Fox has a lot of promise with this trio.

Fox is really feeling the high concept comedy vibe from Lord and Miller.

Already, Phil Lord and Chris Miller have Last Man on Earth at the network, which has proven itself a keeper for two seasons. Now, Fox is doubling down by having another pilot from the duo that mixes sci-fi and comedy, though dealing with time travel rather than what happens after the world ends.

Adam Pally will star in Making History as computer science professor that doesn’t seem to get along with family or students, but discovers time travel. He and two other friends will venture through time inevitably disrupting their lives in the present.