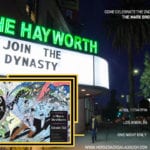 Did you know that famed surrealist Salvador Dali and legendary comedy team The Marx Brothers wrote a screenplay together? That really did happen and it was called Giraffes and Horseback Salad, but didn’t get made.

Tim Heidecker and pop-historian Josh Frank have adapted the screenplay into a graphic novel “A Night at the Surrealists” Starring Salvador Dali and The Marx Brothers : The Lost Movie.

Fore the release of the book, they’ll be doing a special night to mark the occasion at Dynasty Typewriter next week that will feature a staged live reading (feat. some very special guests The Sklar Brothers and Dave Foley), sing-alongs, and visuals to really bring you into the Salvador Dali x Marx Brothers universe.

Who knows, maybe this will lead to an actual movie (or more likely a series on streaming service) being made?