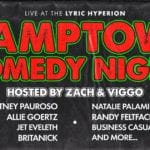 Stamptown, one of the premier brands of international comedy, is back in LA once more to present the prestige acts at places like Melbourne International Comedy Festival and the Edinburgh Fringe Festival.

Whether they’re yanks or from across a pond (or a giant pond), it’s a mind-bending variety night of comedy that has some of the best boundary pushing comedians around (Natalie Palamides, BriTANick, Courtney Pauroso, and, of course, hosts Zach [Zucker] & Viggo [Venn]).

Tickets are only $15 for Stamptown Comedy later this month on Fri. Jan. 17th. Go get ‘em before they sell out here.

In case you didn’t know, Netflix has actually had stand-up specials on their platform for years. So, in further shining a light on comedians from around the world, they’re bringing them altogether under one banner. We’re glad this is happening as the last “global comedy event” was the wonderful Stand Up Planet hosted by Hasan Minhaj that unfortunately had one Bill Cosby as a major consultant and advisor on it.

There is no name for the series yet, but it will be coming out in 2019, presumably like all other Netflix stand-up series where everyone gets their own “episode”. We sincerely hope that they don’t pick a horribly generic name like The Standups or Comedy Lineup this time around.

The Laugh Factory has gathered submissions from around the world of comedians vying for the Laugh Factory’s distinction of Funniest Person in the World. Ranging from Israel to South Korea to South Africa, there’s stand-up to watch from all over the world featuring the amazing comedic talents of people like Canada’s Mark Forward or the Netherlands’ Stefan Pop.

Through a few rounds of voting, any one of these people could win $10,000 and be part of a tour. So, give an international act a chance here in the States.

Set List: The Improvised Show just got 40 more episodes ordered at the Nerdist Channel to be shot anywhere from Nerdmelt here in LA to The Cabo San Lucas Comedy Festival to Edinburgh Fringe Festival to JFL 42 in Toronto.

Oh, did you not know that Set List is killing it everywhere?