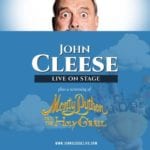 Well, any chance you get to watch Monty Python and the Holy Grail in a fancy theatre with a live appearance by John Cleese is one that you take.

So, maybe you should get some tickets for when that happens at the Saban Theatre in Beverly Hills on Saturday, March 31st for $59-$70 on Ticketmaster?

Monty Python and the Holy Grail is already one of the most highly regard cult comedies of all time. Perhaps this sing-a-long version might bring it into league with the frequent screenings of Rocky Horror Picture Show where people keep coming decked out in costumes.

Coming on to the 40th Anniversary of Monty Python and the Holy Grail, a special sing-a-long version is hitting theaters for a limited theatrical release that encourages those in attendance to not only sign with the musical numbers throughout the movie, but to come dressed up as their favorite character.

We wouldn’t be surprised at all if a lot of folks try to go as The Black Knight.

As it has been two score since the release of legendary comedy Monty Python and the Holy Grail, this year’s Tribeca Film Festival is marking the occasion with a run of several Python films as well as the premiere of a feature length documentary following Monty Python off and backstage.

Roger Graef and James Rogan put together an entire feature length documentary entitled Monty Python – The Meaning of Live, which is set to play at Tribeca on Apr. 25th. The film offers up a close look behind the scenes of the Pythons and what went into for their recent O2 Arena run.

The sounds of clattering, hollowed coconuts will undoubtedly be heard somewhere during this anniversary.