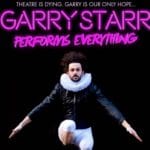 The notion that the title Garry Starr Performs Everything seems ambitious, if not a little ridiculous of course. However, this solo show that he does is indeed so all encompassing of how amazingly funny Starr is in every facet of comedic performance, especially with his knack for physical comedy/clowning.

We don’t want to give too much away as we’d like for Garry Starr Performs Everything to take you as much by surprise as possible (though you should know this is definitely an adult show), but we will say the way he satirizes theater as a concept is flat out brilliant.

Garry Starr Performs Everything is going up again at the Lyric Hyperion on Wed. Feb. 5th at 9PM. Tickets are $10 and you very much should get them here.